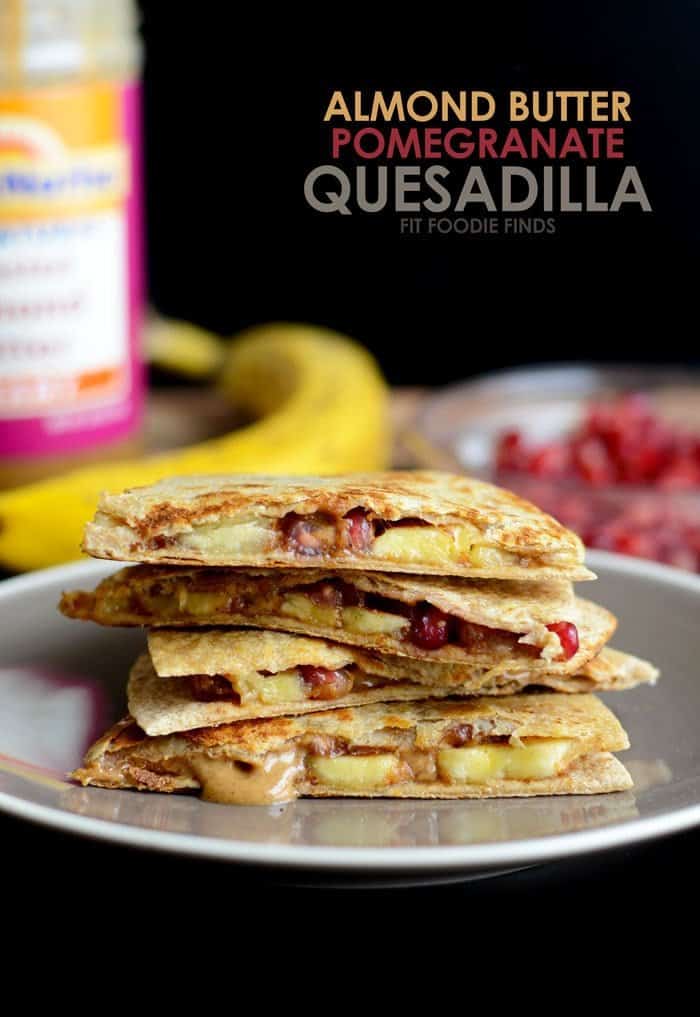 I made a quesadilla with no cheese..is that legal? I could call it an Almond Butterilla, but I don’t think that translates into Spanish very well 😀

Fer reals…I got this mmagnificentidea from one of my blogger friends Monique from Ambitious Kitchen who recently moved away from Minneapolis (who is going to be my Lake Calhoun walking buddy?!?!) to Chicago. She made a Peanut Butterilla with strawberries and bananas. SWOON.

You guys- HAVE to try this. The warm banana melts in your mouth and the almond butter oozes…Oh, have mercy (Full House anyone?!). 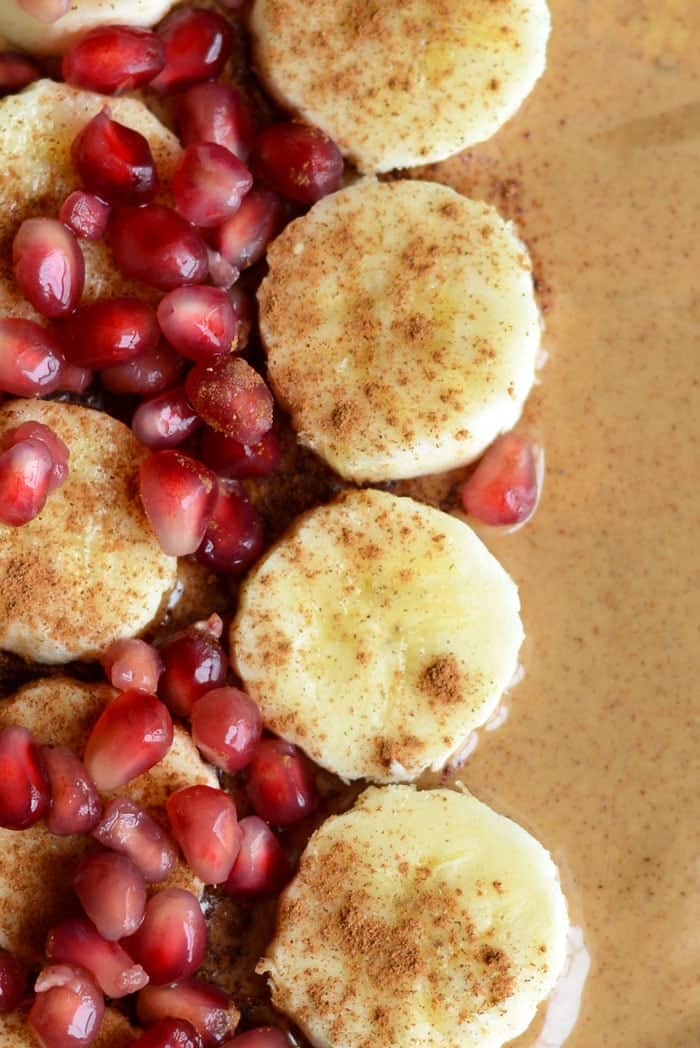 I used a whole wheat tortilla, but you could use corn or a gluten-free variation if you want!

Such a great afternoon pick-me-up or breakfast.

Side note: Sister boy and sister were giving me a hard time about pomegranates because I told them that they are “in season right now.” They said…how do you know? And I said…because I’m a food blogger, duh. 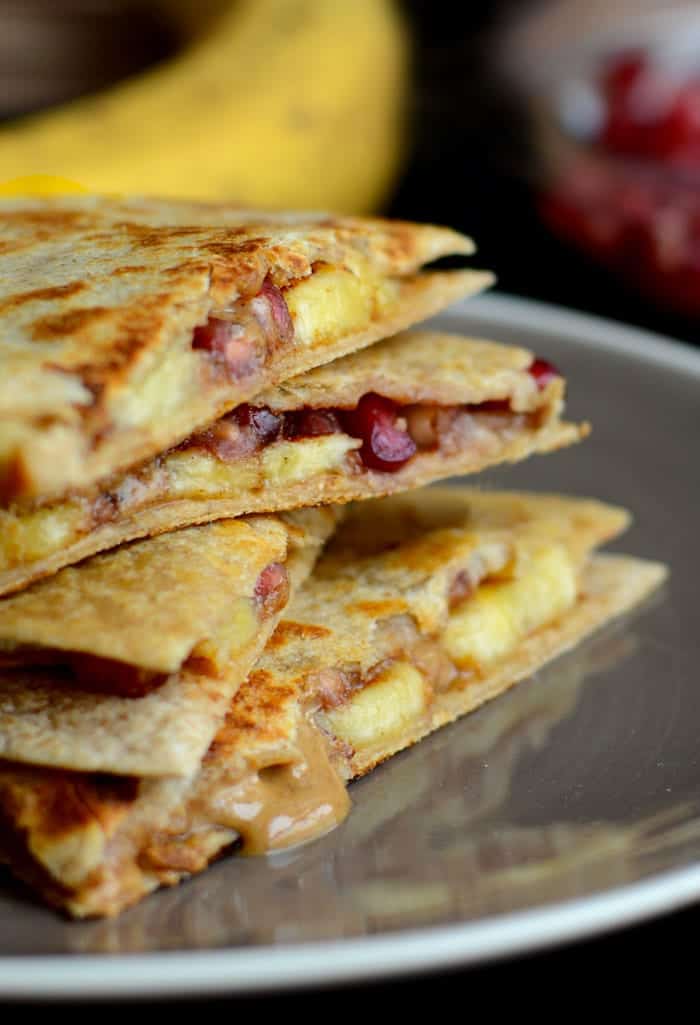 I was surprised Blake ate these bad boys up. He’s usually anti-anykindofnutbutterthatisntpeanutbutter

I guess I converted him to being an almond butter fan. YESSSSS! Speaking of almond butter…I finally caved and got myself a Costco membership. BEST DEALS EVER ON ALMOND BUTTER. My all time favorite brand of almond butter is Maranatha and they seriously have the best deal I’ve ever seen on AB – $9.99 for a giant, 24 oz. jar of it.

If you don’t have a Costco membership you could always get some Maranatha or Justin’s off of Amazon.

In case you were wondering how I made my quesadilla…I only put fruit on one side and then folded it over. 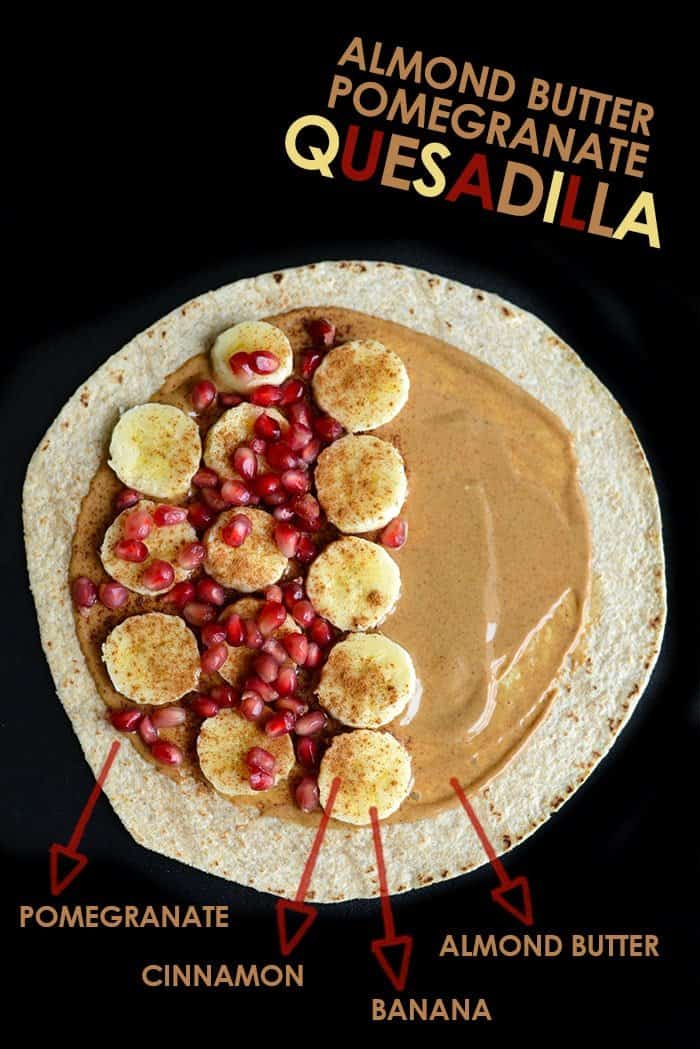 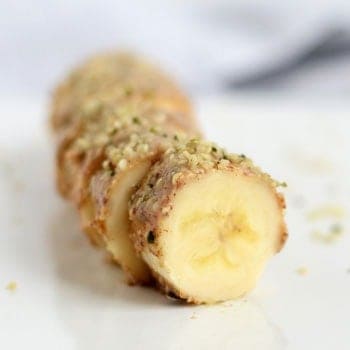 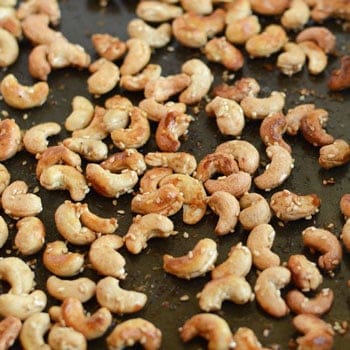 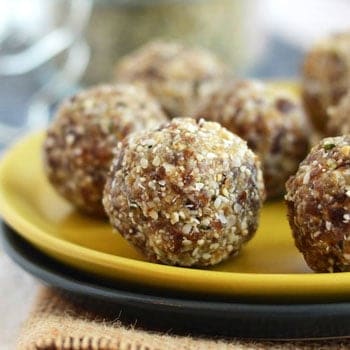 Do you have a Costco/Sam’s Club membership? What’s the BEST DEAL you’ve found there?

Looks amazing!!! <3 please, id love know what is the best way to cook just the quesadillas alone? Id like to prepare them.

Found this article and tried it. awesome, but I had to use fresh strawberries. That’s pretty damn good too, Then I tried fresh Blueberries, and equally good. So I finally broke down and got frozen pomegranate seed and tried it. it’s ok. Not enough flavor in the seeds for my liking. Maybe when I find them in season down south of you, I’ll try them again.

All of your variations sounded great! Fresh pomegranates arils are the best!

Got my dad to take me to Costco (he’s a member; I’m not) just for Maranatha almond butter. They didn’t have it. Only carry Kirkland brand. :(. Got some – hope it’s okay.

YES! They go back and forth between the two brands. I believe they are both made with JUST roasted almonds, no added sugar or salt so YES! It is good 😀

Sounds fab! I still need to try a quest bar!

OMG, this is one genius recipe. I’ve been feeling a bit uninspired by my breakfasts lately. So glad I came cross this amazing quesadilla recipe!

OH Wow!!! These look insane. In the best way possible!
Costco is the best, I go nuts there! Be prepared to buy everything.

Nuts…pun intended, right?! Because they have serious quantities of nuts.

O man!! Be prepared to want EVERYTHING in Costco. Lol I really like their huge bags of raw nuts and seed. Totally worth it when making your own nut butter.

Lee Funke
Reply to  Alex @ get big, go to work

Whyyy don’t we have Costco, Sam’s or any similar store over here ?? Almond butter at around 20 $/18 oz jar hurts my wallet. Whatever, these almond-banan-illas look deeeelish.
And now I’m -this- close to asking for Full House DVDs for my birthday 😉 . I mean it.

OH EM GEE. Hunny, I will send you some. I could get you 2 GIANT things of AB. Seriously, let me know. I can send you stuff 😀

You’re the sweetest but I think you forgot where I live ?! The faraway country of Germany … 🙁

Dude, I bought a Costco membership here in Australia after seeing the loot you guys get…FAIL. We get nothing but giant jars of peanuts and pizzas.

LOL. WTF. Wouldn’t it be nice if it were all the same products?! I think yes.

Oh my gosh I’m seriously making this for breakfast tomorrow!

Yum! I think I just decided what I’m having for breakfast tomorrow! Might swap the pomegranate for sliced strawberries though!

Love this! Costco is the BEST place for almond butter, coconut flour, and almond flour. Deals for dayz

This quesadilla sounds fab! I love a PB and J quesadilla and this is the classier grown up version. 😉

ALMOND FLOUR?!?! How the heck did I miss that.

Omg, YUM! So many of my favorite things in one!! Brilliance! Also, totally chuckled at the Full House reference… MK&A a.k.a Michelle Tanner fan for life. 🙂

Seriously. I have seen every MK&A movie. We’ll solve any crime…by dinner time!

Such a fun quesadilla filling, Lee – love this!

Yummmmm, I am thinking of buying cashew butter for its additional health benefits (it has less Vitamin E, but more iron and zinc), which I think would also be delicious on this. Can’t wait to make this! My friends are moving to Minneapolis in the next couple of months! Her husband took a job with Polaris…

COOL!!!!! They will love it here…minus winter 😀

This would be the BEST weekend breakfast!

Oh wow these look unique and DELICIOUS. Pomegranates totally intimidate me (why? I’m not so sure), but I should eat them more!

There’s tons of tutorials on how to peel a pomegranate out there! In most grocery stores you can find them de-seeded already 😀

These sound and look fabulous! I can’t wait to try them myself.