Serve these Bacon-Wrapped Honey Sriracha Chicken Bites on a piece of apple for the most delicious, paleo-friendly appetizer that only takes 30 minutes to make! 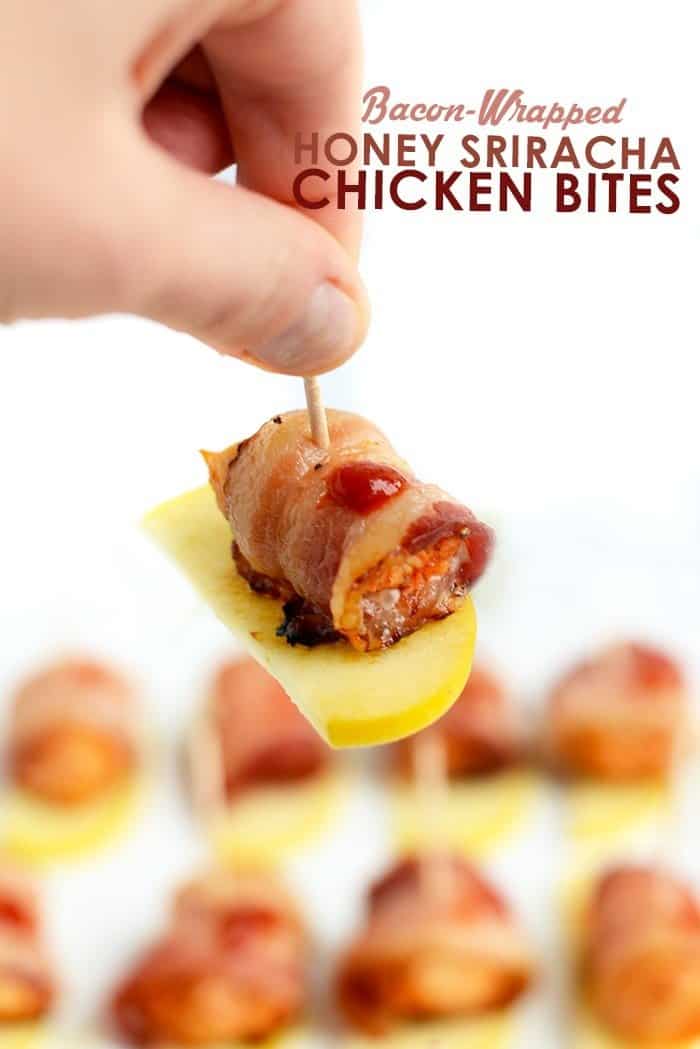 This is one of those recipes that I had not planned on shooting (I usually plan out my content calendar weeks in advanced <—crazy, but it’s what works for me), but that I thought of making after having some leftover chicken breasts and chicken in the fridge. Turns out my lovely lady Lexi from Lexi’s Clean Kitchen has a very similar recipe. I think my mind secretly memorizes all of Lexi’s paleo goodness 😉

So these bites…WOULD BE PERFECT FOR Da Soops Bowl (apparently we aren’t aloud to say the actual words because it’s trademarked…fun fact Friday). 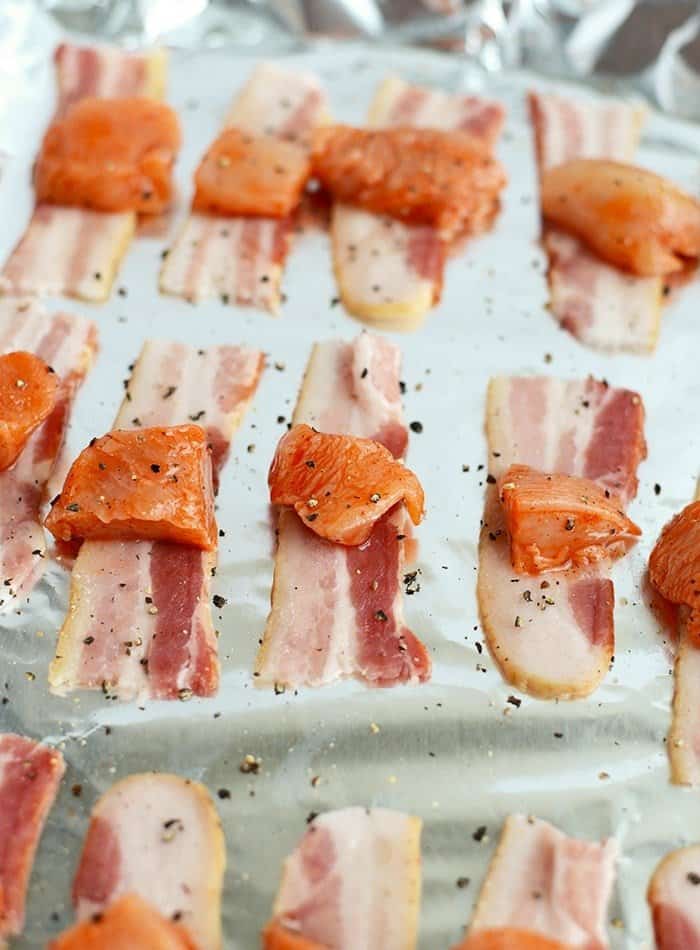 These little bites of heaven are SO EASY TO MAKE!

All you have to do is marinade your chicken pieces for a few minutes in your sriracha honey concoction and then roll them up in bacon pieces. Then, you pop the whole thing in the oven for just under 25 minutes. 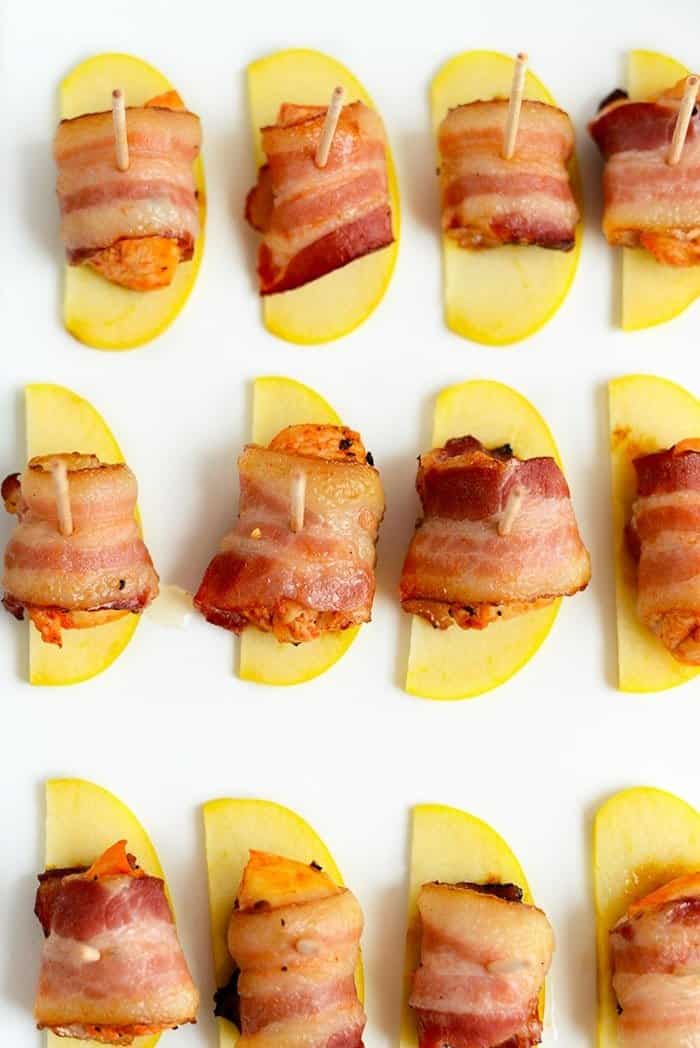 You can use any kind of bacon you want. I used a paleo-friendly, center-cut bacon that doesn’t have all those gross hormones and added nasties in it. Originally I thought an apple smoked bacon would have been perfect, then I decided to throw a piece of actual apple on there. 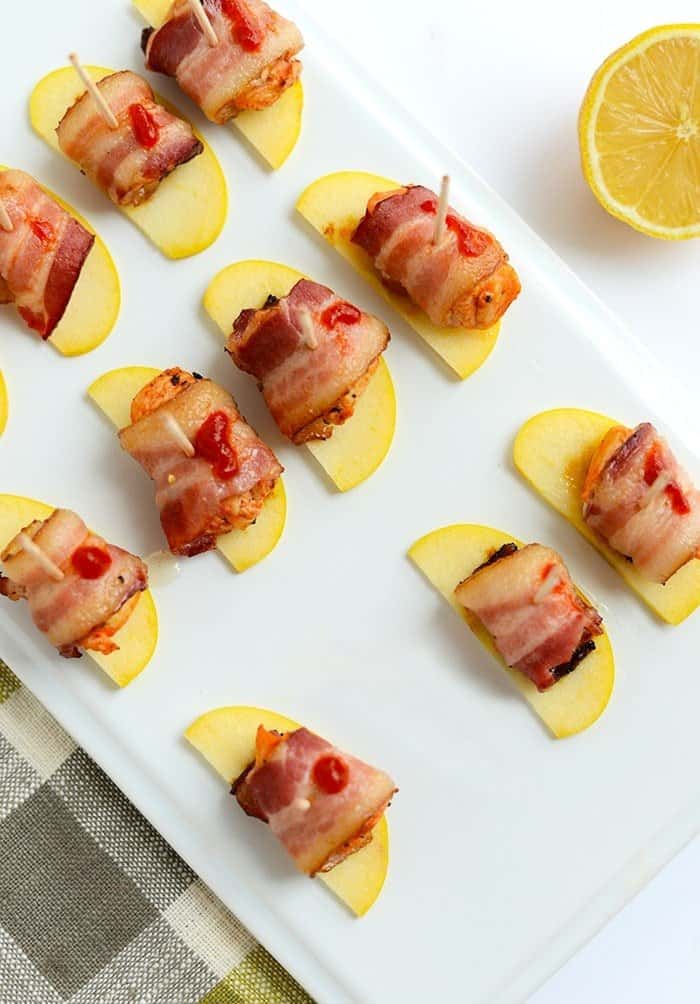 This weekend is going to be pretty laid back, which is really nice. On Saturday night Blake and I are going to our friends house for dinner, and that’s pretty much all we have planned. Honestly, I probably won’t watch the Soops Bowl…I haven’t seen a single game all season (oops).

I think what I am going to do is explore a few more ClassPass studios. I just renewed my contract for another month! WHOOP.

Ohhh Emm Gee!!! I made these last night and I couldn’t even get them off the baking sheet before everyone began devouring them! I usually eat turkey bacon (I was born and raised on it and I know, crazy, but I actually prefer it) but I made it with regular bacon and may be reformed! The only problem: not enough leftovers!

RIGHT?!?!?!?! Blake keeps asking me to make these again. They are the perfect bite-size app. So glad you loved them!

This looks DELICIOUS! Bacon is my husbands go-to food for…well, every meal (as well as snacks). Another great bacon recipe is here with http://radicchio.com/recipes/radicchio-bacon-and-tomato-tortillas/

I try to add in a superfood whenever I can. You know, to balance out the bacon. 🙂

So I am definitely going to make these for tomorrow but question. Do I serve them warm? I’ll have to make them at home and then bring them to the SuperBowl party that I’m going to, so should i bring them in a crock pot? Help! 🙂

Id serve them warm on a cold apple! So keeomg the bacon and chicken in a crock pot is genius!

Glad to see there’s still a place for bacon on a blog wit “fit” in its name!

Oh man, this flavor combination is so bomb! I know the stars of this are the bacon and the chicken, but I also LOVE the apple slices you snuck in there!

Lethal combination. So so worth it. Please send me some.

I love everything about these yummy appetizers!!

Thanks, lady! I’m savoring every last one 😛

You put ALL of the most delicious things on one little bite! Definitely doing these for Sunday 🙂

These look great! I love the combo of sweet and hot.

Perfect Party Food EVER! This is going on my Super Bowl Menu for Sure!!!

These are actually insane! Make them for me in TWO WEEKS #holyshitballsImexcited.

Duh. All I plan on consuming is bacon and popcorn.

What a great combination! Love that lemon in there. These would be perfect for the game.

A little citrus makes everything a little better!

Meg @ The Housewife in Training FIles

Girl these are just the ticket. Winner winner chicken dinner!

Lee Funke
Reply to  Meg @ The Housewife in Training FIles

Which is why I hid them from Blake 😉

You took the words from my mouth. I WANT ALL OF DEESE! Pinned!

You are THE BESTEST FFF in the world.

Oh my! You had me at SRIRACHA! These sound so delicious!!