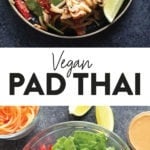 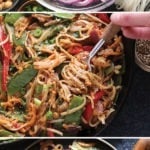 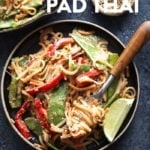 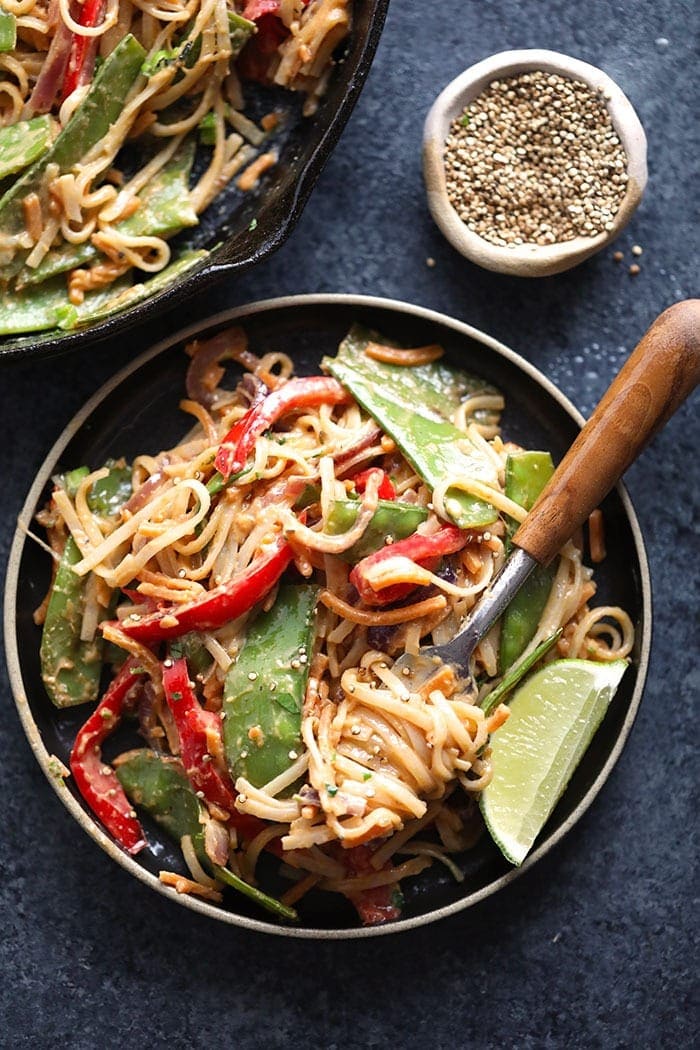 Pad Thai is ALWAYS my go-to when I’m out to eat for Thai in Minneapolis, especially if it’s packed with a ton of colorful veggies. If you live in the Twin Cities, Sen Yai Sen Lek, Karta Thai and Naviya’s are our absolute faves! So, we set out to create our own Pad Thai recipe with a ton of veggies, and instead of the traditional chopped peanuts served on the side of the dish, we created the most creamy Thai peanut sauce. AND the entire recipe is vegan. Yessir.

This vegan Pad Thai with Thai Peanut Sauce is the answer to all your vegan meal prep dreams. Not only is it quick and easy to make, but it’s packed with all those delish bright colored veggies. A batch of this Pad Thai can be easily meal prepped at the beginning of the week for yummy lunches or quick weeknight dinners. Or, if you’re having people over for a meal, this recipe can serve a crowd.

This Thai peanut sauce is made with a garbanzo bean base + a few other clean ingredients that are all placed directly into your food processor and pureed to perfection in seconds. The combination of garbanzo beans, creamy natural peanut butter, vegetable broth, tamari, sriracha, and a bit of lime juice make this Thai peanut sauce so creamy and a delicious thickness to be added to your vegan Pad Thai.

The toasted quinoa garnish for this vegan Pad Thai is a real game-changer. While many traditional Pad Thai recipes call for diced peanuts on the side, since we were already doing a Thai peanut sauce, we wanted to add an alternative that would add a nice little crunch. Insert: toasted quinoa. SO easy to whip up, and so delicious. Simply turn the heat to high and add a 1/4 cup of uncooked white quinoa to a small skillet. Constantly stir the quinoa with a wooden spoon until it begins to brown. As soon as the quinoa starts to brown and pop a little bit, turn the heat off and remove from the pan. Voila! 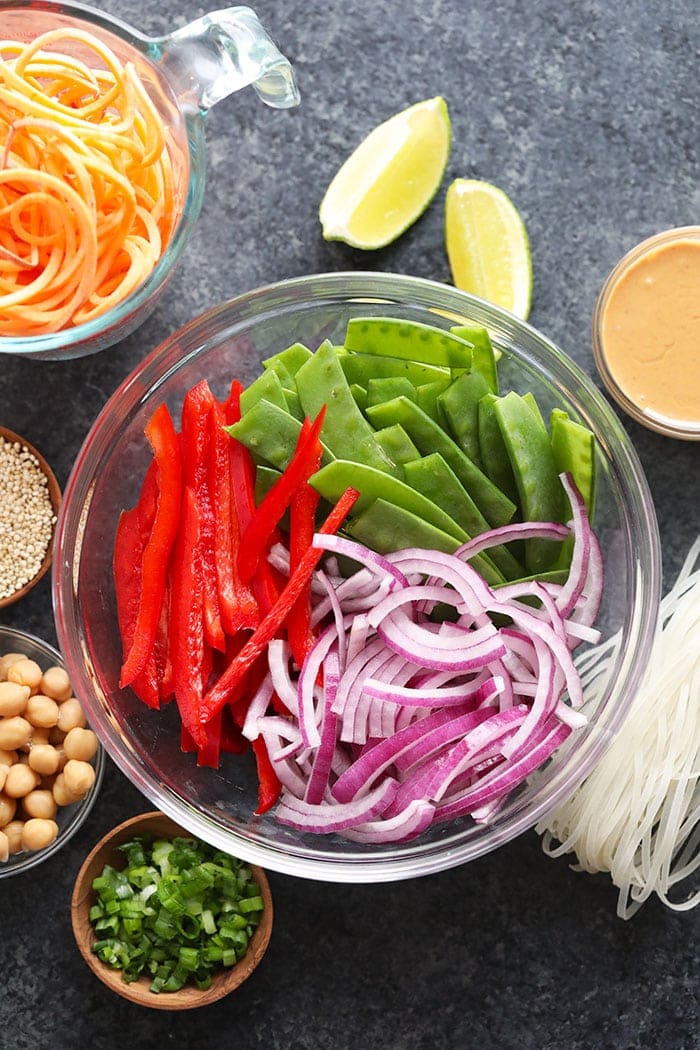 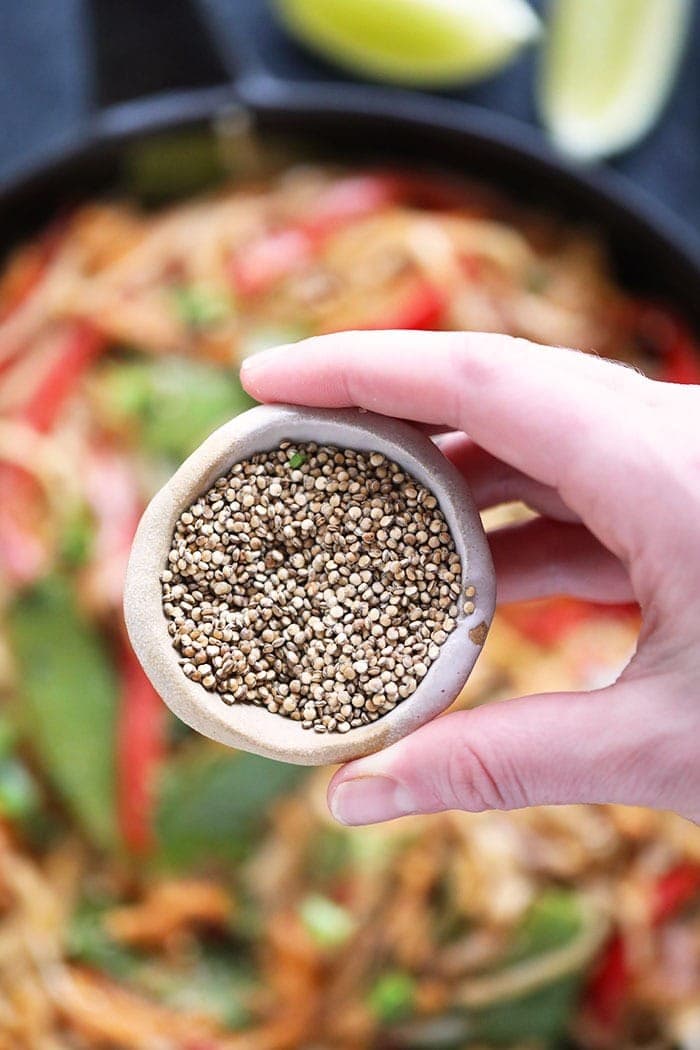 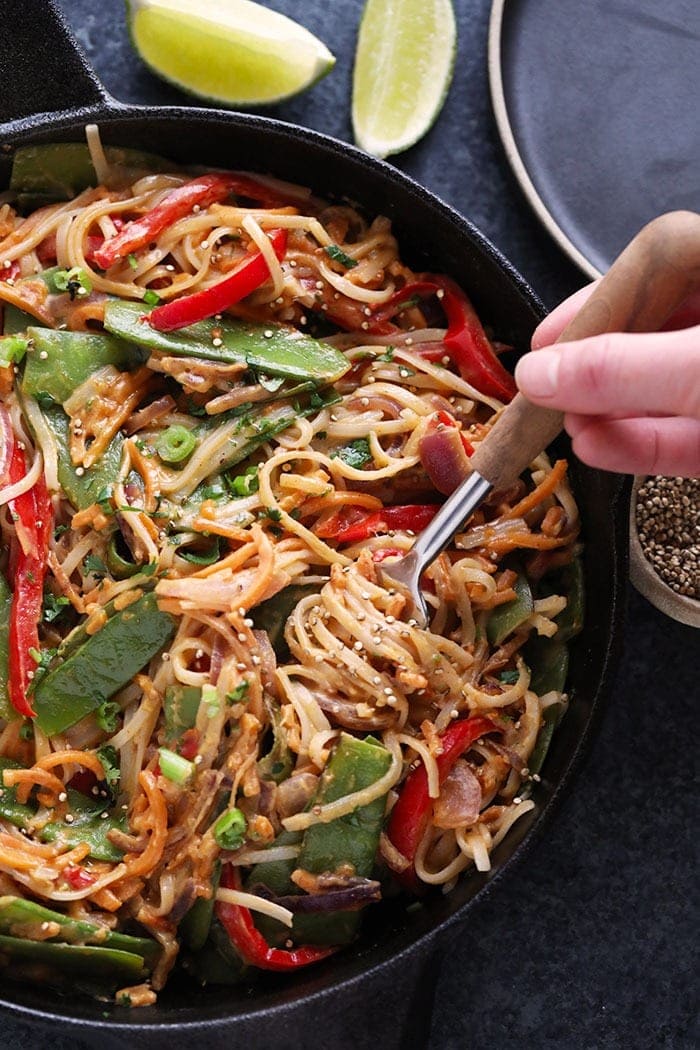 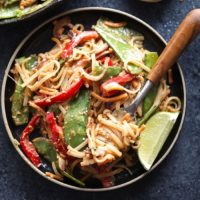 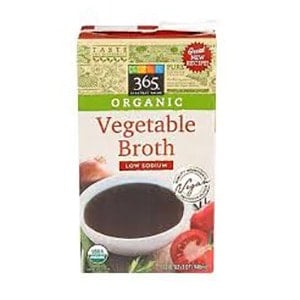 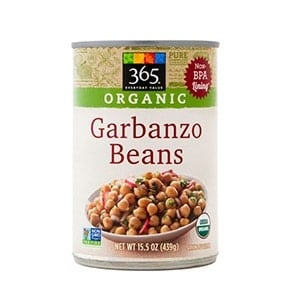 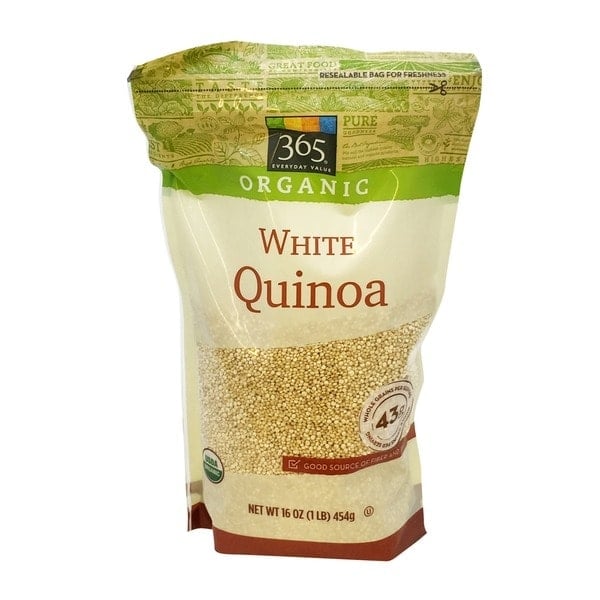 We took 5 basic vegan ingredients that you likely have on hand at all times and made 4 different vegan peal prep recipes! Each recipe uses all 5 ingredients (sweet potato, onion, garlic, garbanzo beans, and quinoa) plus a few other basic add-ins for 4 completely different vegan meal prep ideas.

We loved this! Had to make some swaps since the grocery stores are so picked over. Made it with just Asian noodles. Will definitely make again!!!

Tried this tonight and it came out great! The sauce is perfect- not too strong or salty- just right. Definitely recommend!

They get added in with the other veggies in step 3 (as seen on a video on FB). Should probably be added in for clarification though as I had to go looking myself.

When do you add the sweet potato noodles?

My sauce came out incredibly creamy 👍 but next time I would do alot less chickpeas as I found they really take away from the peanut taste and made my sauce quite bland tasting.

what do you mean by “decased” garbanzo beans? do you have to pick off the outer layer one by one?

Yes! Remove the outer casing of the garbanzo beans!

It’s actually pretty easy if you roll them on a plate. A lot of them will slip off on their own. 🙂