This is the first time I’ve ever gotten in a serious car accident. Well, serious enough to total Libby, my ex Jeep Liberty. I am absolutely 100% okay and there were no other vehicles or people involved. 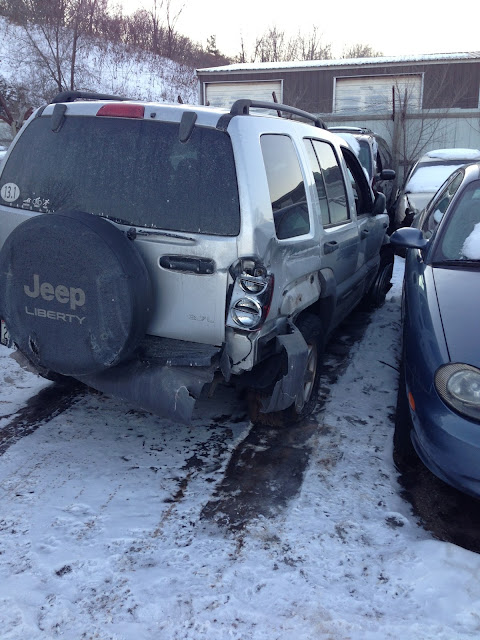 So, what happened?
Wednesday morning was seasonably warm, unlike the day before, which was seasonably cold. I left my house a little bit later than usual because I had plans to stop at the DMV to finally register my expired tabs on my Jeep (shame on me!), which I had gotten a ticket for the previous weekend. I figured I’d go to the DMV closest to my work so that I could miss the morning commute and make it to work on time.

I noticed that the roads were a bit slick in certain places (especially on bridges), so I took my time and went under the speed limit my entire 35 mile commute to work. I live west of Minneapolis and Anytime Fitness Headquarters is in Hastings, Minnesota (Southeast of St. Paul), so my daily commute is brutal.

I was about 3 miles from work, still obeying the speed limit, seat belt on, phone NOT in hand. I went to   accelerate to switch from the left lane to the right lane, when my back end started fish taling. I let up from the gas, but I lost complete control anyways and start spinning. I can’t remember if I spun left or right, but before I knew it, my car had slammed into the middle median ropes. I remember thinking…”oh shit,” and replaying that one Grey’s Anatomy episode where the pole gets jammed through those two people over and over again.

Luckily, I walked away without a scratch. My airbags did not deploy and I did not get whiplash. I think it is because of the way my car hit the median. The passenger side is what slammed into the median, which ended up popping both passenger tires, shattering the passenger window (thankfully no one was sitting there), and tearing up the passenger side in general. I will miss my pride stickers… 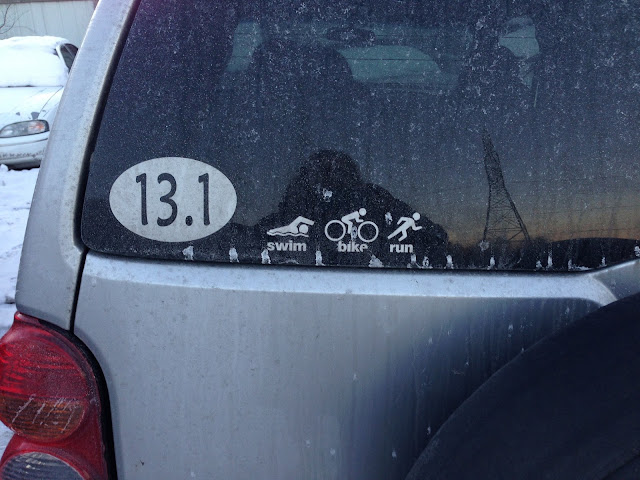 Right away I called 911 and they told me to stay in my car. Then I called Blake, who dropped what he was doing to drive 35 miles to get me. The police man took about 2 minutes to get to me and started with the paperwork right away. My car needed to get toed, but they were backed up because of so many other accidents, that we left my car and Mr. Police Man escorted me to work.

After many calls to my insurance people, AAA, and the towing company. Libby is a goner. I totaled my Jeep :/ Blake and I really had no idea if it was totalled or not, and I honestly not sure which I wanted it to be because I really did love Libby. The nice thing is, I was appraised to get more money than I thought back for my car, giving me a nice-sized down payment for the next car I purchase. I was hoping to hold on to Libby for at least another year or so, because not having a car payment has helped me save save save.

With that being said, I need a new car, so that Blake can have his truck all back to himself. The sad thing is, I am not a car person. I have no idea what kind of car I want and have never really done the whole car shopping thing. Here is a little list of things I think I like in a car…maybe you have some suggestions for me!

Things I Like in a Car
-Good Gas Mileage (like I said, I have a 70 mile roundtrip commute)
-4 Wheel/All Wheel Drive (MN winters…)
-Prefer a smaller SUV, but am open to cars
-Newly Used (2-3 years old)
-Brands I know I like: Jeep, Toyota, VW, & Mazda

What model and make do you suggest of a car/Small SUV?

What places do you look for cars?

i drive from eagan to downtown minneapolis everyday and i have a toyota rav4 and i love it! so far, no problems at all and no slippage at all. good luck!

So glad you’re okay! I’m catching up, so I don’t know if you’ve already made a decision about a car and I think I told you this already- but I am IN LOVE with my Subaru Outback. It’s the perfect size for me and can fit A LOT of stuff in it. It’s great on gas mileage (30+ highway) and is good in the snow.

I just bought a Toyota Prius, and I freaking LOVE it. It gets incredible gas mileage, and it doesn’t have 4-wheel drive, but it feels safe driving it in MN weather. My relatives have been very happy with their Prius purchase (which was almost 10 years ago now!)

4Runners are awesome. I don’t have one, but wish i did!

I have a 2010 toyota corolla…Great gas mileage, dependable, sporty-style (black with tinted windows), and I LOVE it. Toyota all the way.

I own a kia Sorento. Its great for tough northern Canadian Winters! We have had it for 6 yrs and still love it!

I confess to a bias: I have a MINI Cooper S Convertible and it’s addicting to drive.

We’ve been looking for cars and we are checking out subarus. Any one I’ve known to have one, loves them & say they do great in the snow. I really like the new cross trek. It is not huge, but it seems like a great car. Hopefully, you find something soon.

Yikes! Sorry! Glad you are ok. I recently bought a brand new Subaru Forester and L-O-V-E love it! Perfect for snow and for toting the dogs around!

Haha, don’t judge! I watched that video…looks pretty high tech! I think I would be afraid to “use” it because the features are so cool, especially that sliding center console thing! I’m more into the “ass kicking” cars…

I’ve heard SO MANY great things about the Rogue. On my list, absolutely!

I am so sorry, how scary! I love my 4runner, my sister has a highlander and loves it, its a good bit smaller than my huge 4runner!

You already know I think you should at least *look* at a MINI Countryman ALL4, mostly because you are obviously the kind of person who names her cars. 😀

The latest RAV4s are great, too. A gently used Toyota Highlander also kicks some ass.

Care Suggestion: We had a Jeep Compass for our honeymoon rental car and we LOVED it. Take a test drive 🙂 Ah, here’s a (kind of) picture. She was so sleek! https://barefootcrafts.wordpress.com/2012/10/16/honeymoon-day-one/

Glad you are ok, that sounds so scary!! As for a new vehicle recommendation – test drive a Subaru Outback! I love mine (bought it new and have had it for over a year now). It drives so nice and has great gas mileage – lower 30s for highway. Good luck shopping!

If you’re looking for something a little bigger than a sedan, I have a Toyota 4Runner and ABSOLUTELY love it. I got it new 8 years ago and have had 0 problems. They hold up amazingly well, pretty decent gas mileage, and they’re incredibly safe. Plus they’re not gigantic but all the seats will fold down to fit just about anything (bikes, furniture, 15 suitcases for when I come home for the holidays…) New or used it’s a great car to have.

I’m glad you were able to walk away! I don’t have a car recommendation since I live in the desert, but once you figure it out mostly what you want try AAA car buying. It’s a free (and stress free!)service and they help you find the best deals for new and used vehicles. It’s like car shopping without having to wait inside dealerships for hours.

Scary! So glad you’re ok! I got a ticket for my expired tabs last month, too… boo!

Car suggestions… I drove a five-speed Jetta until it had 250,000 miles on it. It was fun to drive and got great gas mileage. I now drive a TSX, which I LOVE. I feel super safe in it and it averages close to 30 mpg. But, it’s not the best on ice or in snow. I know ami loves her MDX, so talk to her, too! 🙂