I LOVE SUMMER AND I DON’T EVER WANT IT TO END.

I am so excited to share some photos and insider footage of my latest travels to the Boundary Waters, which is located in northern Minnesota (basically to Canada). The BWCA is over a million acres of lakes, streams, forests, etc. formed by glaciers WAY BACK WHEN. (Click here to see a map of what I’m talking about.) There’s thousands of little lakes that are protected by the USDA to preserve the original terrain. Pretty much nothing but canoes and people are allowed to travel into the BWCA. Sister, Sister Boy, Man Candy, and I spent a long weekend in the BWCA and I’m officially in love. 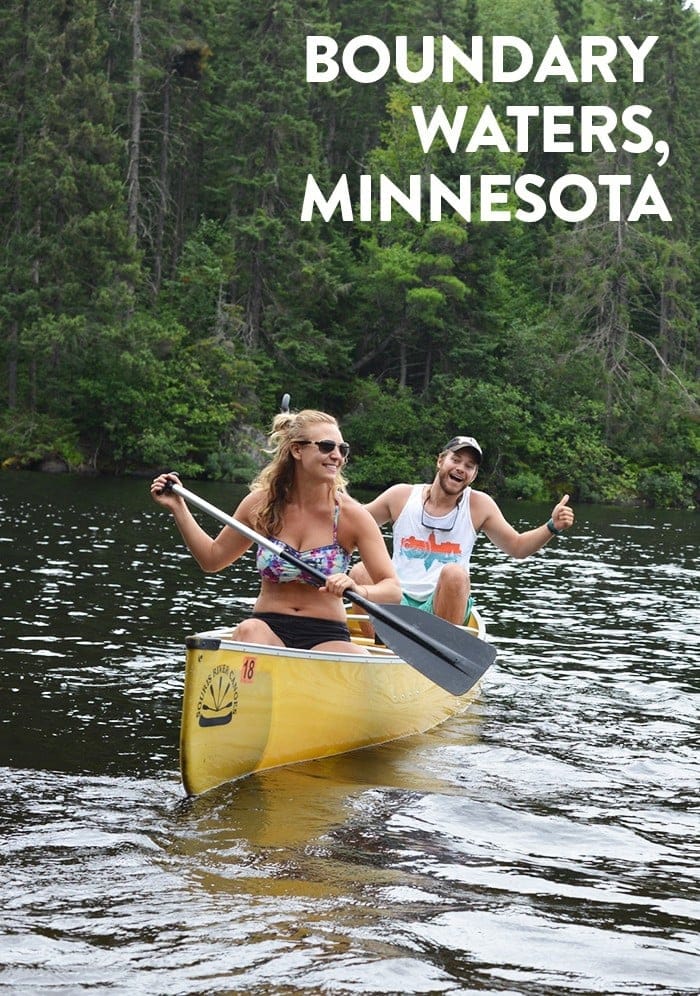 I even made a sweet video with some canoeing/camping highlights! Thank you little brother for the edits!

Before this trip, both Mark and I had only ever been car camping. What’s the difference between car camping and real camping? Well there were no showers, electricity, fresh/running water, or bathrooms. WE POOPED IN A LATRINE. There were designated campsites and each had a latrine, which is literally a big hole surrounded by forest with a toilet on top. Nothing like pooping in the open. Thankfully we had sister and sister boy with us AKA our camp mom and dad, which is what we referred to them as the entire trip. These two are seasoned veterans when it comes to camping and canoeing. They’re the ones who planned the entire trip. They even brought biodegradable wipes 😀

We headed up to Grand Marais on Thursday morning. Easier said than done. It was a fiasco getting Mark from Milwaukee to Minneapolis because his flight got cancelled Wednesday night. He was part of that big Southwest outage (go figure), so we ended up having to spend $$$ to get him on a early morning flight Thursday morning on a different airline because all SW flights were booked. You see- Mark and I scheduled Global Entry interviews in Grand Portage, MN, which was only 45 minutes from our Thursday night destination. I want to preface that obtaining a Global Entry appointment is extremely hard to do. All Twin Cities, Chicago, and Milwaukee locations were booked 3 months out, so getting these Grand Portage appointments were really important to us because we leave for Europe in 2 weeks! Anyways- Thursday morning, Mark’s flight was delayed 2 hours, which gave us like a 20 minute window of making our appointments. We booked it and thankfully didn’t run into any traffic, making our appointments with 4 minutes to spare. 4 MINUTES.

We spent Thursday night in Grand Marais, MN (which was about an hour from our entry point in the Boundary Waters). Guess what? Coincidentally, Linley and her man had Boundary Waters plans the same exact weekend, so we all met up in Grand Marais for a beer and apps! NUTS. PS: I drink beer now…this a new thing. We met up at Voyageur Brewing. Thursday was an early night because we were up and at it early Friday morning to head to Tuscarora Lodge, which is where we portaged out of. Shell and Ben strapped their canoe to the car and Mark and I rented. The nice thing about Tuscarora, was that we could rent our canoe, leave our car on the property, and portage all out of the same place. SEAMLESS. 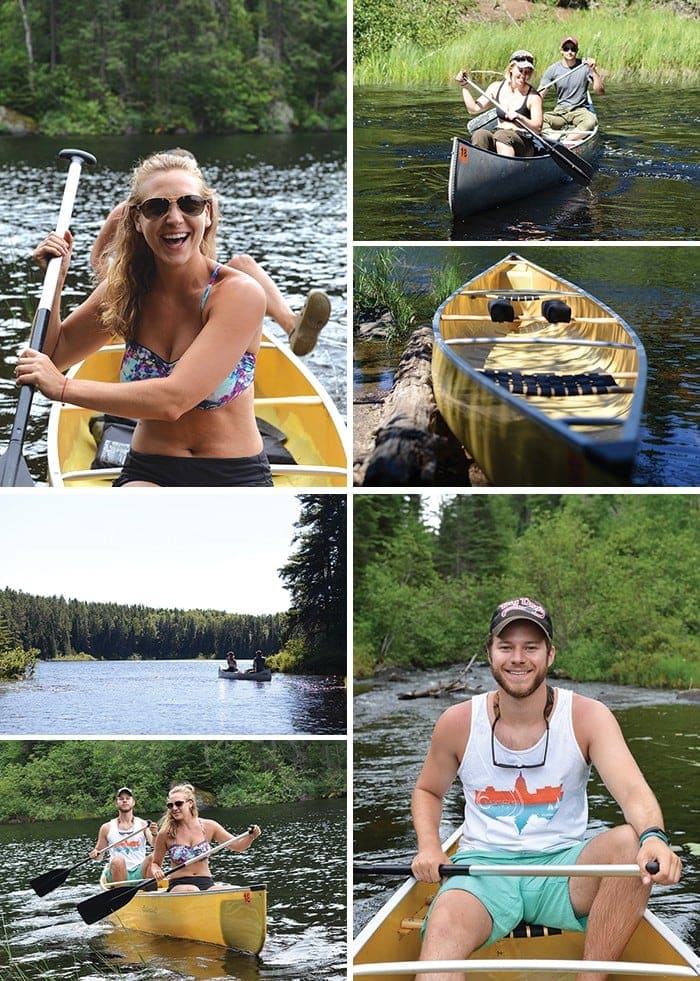 Do you know what to portage means?

I thought I did before this trip, but then we had our first 50 rod portage of the day and realized I had no effing idea was portaging meant! Okay so here’s the deal- portaging basically means you carry all your shit (gear + canoe) from one lake to another. You measure a portage by rods. 1 rod is the length of a canoe. I’m going to ballpark it and say 50 rods is about 1/4 mile, but that may be way off! Each portage is very different. Some are up hill, rocky, muddy, foresty, etc. Don’t forget you’re carrying around a 50 pound pack and if you were Man Candy…you also carried the canoe! The first day we portaged 6 times before we got to our camp site for the night. They varied in length from 20 to 50 rods.

The paddling part was MY FAVORITE. I loved spending quality time with Mark in the wilderness. Mushy? Truth. It was crazy how each lake varied when it came to the wind. One lake could have been super windy and the next one over was very calm. Can we talk about the weather for a second here? We had the hottest week of the year last week in Minnesota (we’re talking like high 97 in the Twin Cities, which is RARE). Up north, high’s were in the upper 80’s which is REALLY hot for these areas. What does this mean for the bugs? ADIOS. We couldn’t believe it the first night that there was not a mosquito in sight. Apparently they hate the heat. The second night was a different story. It rained, so the temperature cooled down and there was just a MASSIVE swarm of mosquitos. I’d never seen or heard so many mosquitos in my entire life. I counted and on one of Mark’s shoulders, he had 26 mosquito bites. Me? Not a single one! A random fact about me is that my skin does not react to mosquito bites. They can bite me, but I have no irritation afterwards. 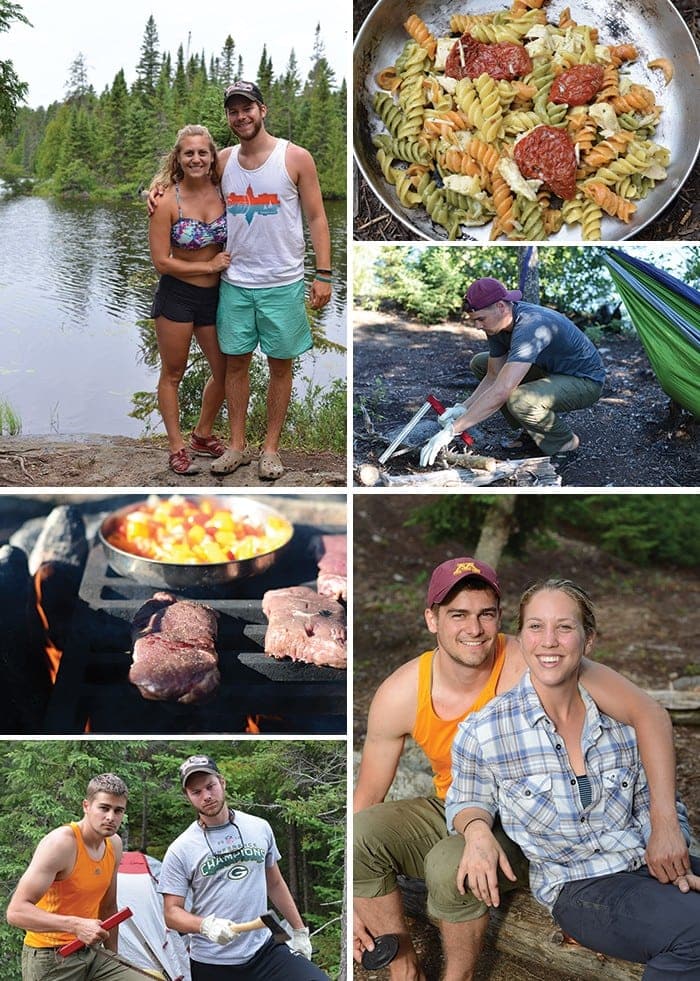 Michelle and Ben know how to eat when it comes to camping. Since they’ve done this about 101 times, I knew I wouldn’t be hungry 😛 We brought in frozen steaks, frozen bacon, a water bottle full of eggs, pasta, cheese sticks, tuna, oatmeal, PEANUT BUTTER, tons of snack, 2 huge bags of wine, and a bottle of whiskey. Oh- I also made a giant batch of BALLS. Nothing like a ball after a 3 hour paddle. The coolest part of our camping cuisine was actually the water. I had never seen this done before, but we sterilized our own water right from the lake! Michelle and Ben had this awesome UV light gadget that cleared our water from bacteria right before your eyes. It was absolutely mind-blowing.

I enjoyed a lot of things about this trip such as being 100% disconnected from reality, being intentional with my time, slowing down, and not being on a schedule. I had no service or wifi for 3 days and it was amazing. It’s crazy how much I rely on my phone and was nice to just be present. There’s also something about being surrounded by untouched nature that makes you think about the meaning of life. I’ve only been home for 3 days and I’m already craving another BWCA trip.

The BWCAW is one of my favorite places ever. It’s one of MN’s hidden gems!

I KNOW!!!!! Almost didn’t write this because we gotta keep it secret. SHHHHHHhhhh.

I love the boundary waters! We did a trip there when I was 14 or 15 and it was amazing. Any opportunity to get away from people and technology is so terrific. I love being able to be on a schedule with the sun and nothing else. It’s so freeing and relaxing. I hope you got to enjoy the magical call of the loons while you were out. Definitely my favorite part about canoeing up there <3

Wow, this looks like a beautiful place! I’ve never heard of it before. There’s nothing better than being on the water in the summer. You’re braver than I am–I can’t do camping because I LOVE showering! haha

This trip made me realize how much I LOVE BEING CLEAN.

This sounds like such an amazing trip! Thanks for sharing! I just started camping a couple of years ago, and I’m still learning. My BF and I camped in Yellowstone last summer, and it was so amazing. Your post gave me more meal ideas for camping!

OMG that sounds amazing!!! I’d love to camp Yellowstone. I haven’t been since I was a wee little kid!

This was an awesome read! Thank you for sharing! I’ve always thought I wanted to go to BWCA as I’ve heard so much about it but i’m such a chicken. This post makes me think about it again though. You should have gotten a video of the water being sterilized! Sounds like a cool gadget!!!

You will absolutely love it if you make it up there! I KNOWWW the water thing was so cool! We used a UV light thing which you literally just stick in your water bottle and hold in there for a minute or so. It was pre-set for a liter of water! Next time!

AZ@...And A Dash of Cinnamon

AH this looks amazing. I spent some time in Itasca up in Minnesota few years ago and it was beautiful.

So now I’m dying to go to the boundary waters and you guys are the cutest fam ever! Loved the video and french pressed coffee, my jam!

What a great trip you had! I would love to try such an outdoorsy vacay, but since neither I or Boyfriend have ever done it, it would be reassuring to go with someone a bit experienced, so good that your sister and her hubby are seasoned campers/canoers 😀

Gorgeous photos and I bet the experience of being out in nature must have been amazing. I’m craving some time away from the city, cars, laptops and technology.

There’s no way Mark and I would have survived without them! They were so prepared!

I loved reading this! I went to summer camp in Canada with canoe tripping and this brought back a lot of memories. So much fun!

Ahhhh that is soooooo fun! What part of Canada?