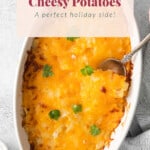 Cheesy Potato Casserole is a midwestern holiday staple. Our recipe is made with frozen hash browns, a homemade cheese sauce, and…more cheese on top!

We’re honoring our sister site, Cheese Knees, with this epic cheesy potato casserole recipe! It’s made 100% from scratch and a midwestern staple that we enjoy at pretty much every holiday or event.

Why? Well, we’re all about cooking from scratch to eliminate all those fillers and add real, delicious flavor!

Why You’ll love it!

100% made from scratch: there is no canned creamy soup involved in this recipe. We’ll teach you how to make a cheese sauce from a roux instead.

Serves a crowd: this recipe serves 9-12, so it’s perfect for the holidays or big gatherings.

Easy and cheesy: this recipe is easier than it looks. Oh, and super cheesy.

Can I shred my own hashbrowns? Feel free to use fresh potatoes in this recipe instead of frozen. We used frozen becuase it takes the elbow grease out of it!

#1 Tip – Shred Your Own Cheese

Our #1 tip when cooking with cheese is to shred your own cheese! Freshly shredded cheese not only tastes better, but it melts into a cheese sauce so much better, too!

Flour —> the only kinds of flour we recommend swapping the all-purpose for are white whole wheat flour or an all-purpose gluten-free flour blend to keep it g/f.

Chicken broth —> any kind of broth works for this recipe. If you’re looking to keep it vegetarian, we suggest veggie broth.

Sour cream —> want to lighten things up a bit? Feel free to swap the sour cream for Greek yogurt.

How to Make Cheesy Potato Casserole

Now that you know we’re making this cheesy potato casserole recipe from scratch (AKA sans store-bought creamy soup), we’re going to walk you through how to do it!

Add shredded hashbrowns, shredded cheese, garlic powder, and salt to a 9×13-inch casserole dish. Mix everything together and set aside.

Melt butter over medium/high heat. Then add in flour and whisk until a crumble forms. Slowly add the broth and mix constantly until there are no lumps and a thick roud has formed.

Remove the roux from the heat and add shredded cheddar cheese. Mix until therea re no lumps and all cheese has melted. Finally, add in the sour cream and mix again.

Pour the cheese sauce on top of the hashbrows and mix to combine.

Bake at 350ºF for 30 minutes. Then, remove from the oven and sprinkle on the remaining shredded cheese. Bake for 15 more minutes.

Finally, turn your oven to broil and broil the cheesy potato casserole for around 2-3 minutes or until the cheese browns.

Add a protein: turn this into a meal and added cubed ham or even pre-cooked shredded chicken!

Cooking for a holiday like Thanksgiving, Christmas, or Easter and need to complete your meal? Here’s a simple menu we know you’ll love!

Transfer cooled casserole into an airtight container. Store in the fridge for up to 5 days.

We suggest reheating your cheesy potato casserole exactly how it was made in the first place, in the oven!

Transfer casserole into an oven-safe dish and reheat at 350ºF for 15-20 minutes. 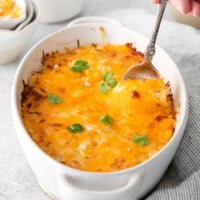