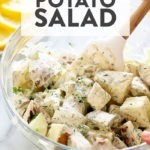 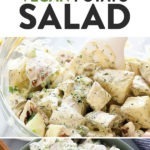 This vegan potato salad is light, bright, and delicious! Not only is this potato salad the perfect summer side, but it’s also so easy to make.

If I had to choose three words to describe this vegan potato salad they would be; herby, satisfying, and delicious.All you need is vegan mayo, apple cider vinegar, lemon juice, dill, and chives for the best vegan potato salad dressing around town!

We have a few potato salad recipe on FFF and my favorite used to be this Baked Potato Salad. But then this vegan potato salad came along.

I think I love this vegan potato salad because it is so light and flavorful. Sometimes potato salads can be a bit much, but not this one.

The light and lemony dressing reminds me of a summer day next to the pool and it makes me so dang happy.

How do you make vegan potato salad, vegan, you ask?

Ditch the greek yogurt or the regular mayonnaise and get yourself a vegan mayo!

If you regularly follow a vegan lifestyle, you know that there are so great vegan mayo on the market. We used the Fresh Thyme Vegan Mayo and it was SO good. Need more vegan may options?

What is the Best Vegan Mayonnaise?

How to Make Vegan Potato Salad

We kept the ingredient list short and sweet for this tater salad. We wanted the potatoes to really be the star of the show.

First things, first. Cook the potatoes. There are two options when it comes to preparing the potatoes for this recipe:

Get ready to make the herbiest and tastiest potato salad! We used a whole bunch of dill and chives, but any herbs would taste amazing. Mince the herbs as fine as you can, add them to a bowl and then add the lemon juice, apple cider vinegar, and vegan mayo.

The final step to making this vegan potato salad a reality is to mix, mash, and chill the salad in the refrigerator. All you have to do is place all ingredients in a large bowl and mix well.

Try your best not to completely puree the potatoes. You want to just tenderize them a bit so part of the potato becomes part of the sauce.

Lastly, place the potato salad in the refrigerator and chill for at least 30 minutes before serving.

That’s it! After it’s fully chilled, serve it next to your favorite BBQ main dish, in a buddha bowl, or as a meal prep meal for lunch all week!

The last think you want is a potato salad that has turned into mashed potatoes. Be sure your potatoes have a little bite to them rather than a soft potato chunk.

Another important step is to let the potatoes cool completely before tossing them with the sauce!

We kept this vegan potato salad pretty basic so that the potatoes could shine! However, feel free to get creative and add in anything you’d like! Below are some add-in ideas!

To store potato salad, let the potato salad cool completely and then place it in an air tight container and store it in the refrigerator for up to 7 days if stored correctly.

It looks so creamy! In love with this recipe, I’ll make it very soon 🙂