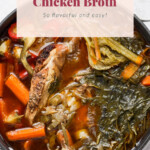 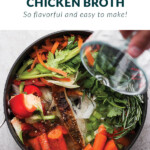 Make this homemade chicken broth and use it in your favorite soup recipe! This broth is the most flavorful chicken broth on the internet. You can use it in soups, chilis, sauces, and more!

How Do You Make Chicken Broth From Scratch?

Making homemade chicken broth from scratch is a bit time consuming, but it’s worth it. All you need vegetables (or vegetable scraps), chicken, herbs, and salt! After that you simmer all day long and BOOM, you’re ready.

Why should you make this chicken broth recipe?

This is the age old question. What is the difference between chicken stock and chicken broth?

Chicken stock tends to be made with more bones and simmers for more than 2 hours. Stock also is made with chicken and vegetables.

Chicken broth tends to be made with chicken meat and bones, vegetables, and seasonings. It can have a lower simmer time. Broth generally has more flavor because it is seasoned!

Everything You Need to Make Chicken Broth

For this chicken broth recipe we used the carcass and meat from our herby whole roasted chicken. It is already flavored with a delicious dry rub and some butter. We scraped all of the herbs, fat, and left over chicken pieces into the pot for this chicken broth.

If you don’t have a whole chicken, use any chicken meat that you have around the house! You could also use a rotisserie chicken that you can buy at the store!

Most chicken broth and chicken stock has mirepoix as a base which is a mixture of onion, carrot, and celery! We use mirepoix and red pepper for extra sweetness!

As for the vegetable scraps, you can use whatever scraps or even fresh vegetables that you have on hand! We put old vegetables scraps in the freezer to use in broths and sauces! Below is an example of scraps that you can save and use in broth or stock!

We recommend that you do not skimp on the salt for this chicken broth recipe! The salt in this recipe helps bring out all the delicious falvors!

If you are hoping to make a lower sodium broth feel free to salt to taste!

Water is the base liquid for this recipe! All the flavor from the meat, vegetables, and herbs will simmer in the water and make it so tasty.

We simmered this chicken broth with parsley, thyme, and rosemary. We also used a chicken carcass that had some tasty flavors on it already (chili powder, salt, paprika, sugar).

How to Make Chicken Broth

Here we go, people, let’s dive into everything you need to do to end up with the most delicious chicken broth, ever!

Add all of the ingredients for this chicken broth to a large pot.

How big of a pot do I need for this chicken broth? We recommend using a deep 12 quart stalk pot or bigger. You want enough room for all of the ingredients and water. It is important that everything has space to simmer.

After everything is in the pot be sure that everything is mixed together and combined. Bring the water to a boil over high heat and then turn the heat to low and simmer for at least 4 hours.

The longer you simmer the broth, the more flavorful it will be!

After the broth has simmer, remove all of the large chunks (chicken carcass and large chunks of vegetables) from the pot and discard them.

To store the chicken broth, let the broth cool completely before pouring it into mason jars. Tightly seal the mason jars and place them in the refrigerator for 1-2 weeks or in the freezer for up to 3 months! 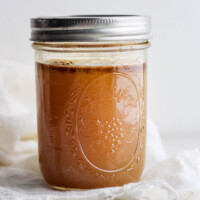 How to Make Chicken Broth