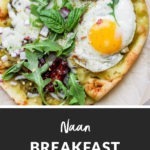 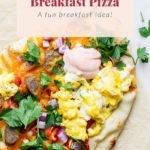 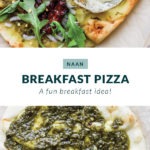 Make pizza night easy and make these naan pizzas! You can make these breakfast pizzas a few different ways, but both ways are packed with healthy and delicious ingredients.

Say hello to the newest addition to pizza night or pizza MORNING! These naan breakfast pizzas skip a few steps in the pizza making process. No homemade dough necessary because sometimes you just don’t have time!

Naan pizzas are fun to make, design, and eat! Pizzas are not just for dinner, they can be for breakfast, too.

These naan breakfast pizzas have a little bit of everything. We went with two different naan pizza flavors. Pesto Pizza with Fried Eggs and Sausage Breakfast Naan Pizzas with Scrambled eggs!

But first, how do you make sure that the naan crust gets super crunchy rather than soggy, because nobody likes soggy pizza crust!

How to Make Naan Crust Crunchy

These pesto naan pizzas are so flavorful. Though these seem a bit fancy, they are super simple to assemble. And? All of the ingredients are easy to find! Here is everything you need.

All you have to do is spread the pesto out on the naan and top it with cheese, sun dried tomatoes, and onion. Then bake!

When the cheese is melted, remove the naan pizza, and top with with a fried egg and fresh arugula!

You can’t go wrong with the naan pizzas, but if you are more of a scrambled egg kind of person, these sausage breakfast naan pizzas are for YOU!

My goodness, the flavors and the sauce that you top this breakfast pizza with is so delish.

First things first. You use tomatoes as the “sauce” for this pizza, so those go on first. From there you top the tomatoes with cheese, onion, and sliced chicken sausage. Bake the pizza and after top it with scrambled eggs and a delicious franks + greek yogurt sauce!

These naan pizzas are the perfect savory breakfast for any morning. You can make these breakfast pizzas a few different ways, but both ways are packed with healthy and delicious ingredients.
Prep:15 minutes
Cook:15 minutes
Total:30 minutes
Fat 25
Carbs 8
Protein 14
Yield: 4
Print Pin Rate

*Nutrition is for the Naan Pizza.