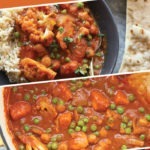 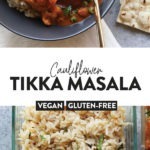 Pack your lunch or dinner with tons of veggies and warm spices. This Cauliflower Tikka Masala recipe is vegetarian, loaded with hearty ingredients, and the best recipe for fall or winter meal prep!

This is one of those recipes where the day we perfected it at Fit Foodie HQ I wanted to tell EVERYONE about it. Instead of doing that, I’ve made it about 4 times and every time it got better.

We love how warm and lovely the flavor of this cauliflower tikka masala is and that it’s naturally gluten free and vegan. Even the non-vegans out there will love this.

Lucky for you this is a one-pot meal. That’s right, you throw everything into one giant pot and dinner is ready in 30 minutes. Here are some other tips + tricks to keep in mind before you make this cauliflower tikka masala recipe!

Don’t be scared of flavor. Oh, don’t go light on the spices. This is supposed to a dance party in your mouth. If you haven’t ever worked with a masala spice blend before, don’t be nervous!

If you don’t want to add as much as we did, start off by adding a teaspoon of spices at a time until you find a spice level you are comfortable with.

We love naan. We served this recipe with sprouted brown rice and naan. Check out TJ’s or Whole Foods for naan! I’ve never made my own, but I hear it’s pretty easy. If I did make it, I’d follow Gimme Some Oven’s recipe.

Pack it with veggies. Let’s talk about the veggies in this dish really quick. We decided to use dense vegetables that would sustain us! Here are the veggies we used!

If you’re not digging our veggie choices, try using normal potatoes, any kind of root vegetable, or squash!

If you insist on adding meat, I’d go with chicken, or maybe even meatballs. OMG TIKKA MEATBALLS WUT.

Everything You Need to Know

Tikka Masala is traditionally a tomato and cream based sauce mixed with traditional Indian spices. We substitute the traditional cream ingredient for coconut milk so this tikka masala recipe has an earthy, slightly spice, coconut flavor.

What is Indian masala spice?

Indian masala spice is a mixture of ground Indian spices such as fennel, black pepper, cloves, cinnamon, mace, cardamom, curry, cumin, and coriander. It is a flavor-packed spice mix that is great to have ready to use in your pantry.

What can I serve with this cauliflower tikka masala recipe?

Can I make this tikka masala recipe in the slow cooker?

Place all ingredients for this tikka masala (except for the peas) into the slow cooker and cook on high for 3-4 hours. Add the peas with about 30 minutes left in the cook time.

Serve over rice or your favorite accouterments.

You can also make this cauliflower tikka masala and freeze it for later. Let the tikka masala cool completely before placing it in an airtight container. Label the container with the date it was made and store it in the freezer for up to 3 months.

Thaw & Reheat: When you are ready to eat the frozen tikka masala, remove it from the freezer and let it thaw out in the refrigerator. Sometimes this can take up to 24 hours.

*If using frozen peas, add right at the end.

*Nutrition is for 8 servings and does not include rice.

Thank you so much for sharing such useful and interesting information.

I loved your dish. It looks delicious and I am going to try this.

I wrote a glowing review of this recipe two years ago. I’m here to say that two years later we are still making this on rotation. My husband and I continue to love this recipe. It’s one of my favorite things to make!

Oh Colleen, WE’RE BLUSHING! So happy to hear you and your husband love this tikka as much as we do <3

Thank you so much for sharing such useful and interesting information.

This is one of the great informative post and wonderful article i come across . Thank you for sharing this wonderful post with great info.

Really informative and inoperative, Thanks for the post and effort! Please keep sharing more such blog.

I cannot thank you enough for the blog. Much thanks again. Awesome.

I tried this recipe today, and cooked for the first time, although I sell oils for a living. So I’ve been really bored lately and been needing to find a hobby. I’ve never cooked before. Rather rewarding to actually do it, it tasted nicely, but a little too spicy, just the way I like it hahaha.

Thanks LEE for sharing this awesome recipe.

Glad you loved this!

Your writing is perfect!!!
You gave me great joy!!!
I simply need to offer a gigantic go-ahead for the decent data you have here on this post. I can be returning again to your blog for extra soon.

Thank you Lee. I wanted to ask:

Have you ever considered fermenting any of the ingredients individually? I hear that is very good for Gut health.

It sounds really good. Would like to try it but wondering if it can be made in a slowcooker?

Love the healthy recipes you share. I have been following your page for a while now . and there are so many things on your website for vegetarians which is what i love about your blog. I tried this recipe with A2 desi ghee by Kapiva and i loved the taste.

Yay! We work hard to make sure all diets love our recipes. This one, in particular, is a favorite of mine. SO flavorful!

This recipe is so delicious and flavorful! I have made this dish twice, and it will definitely be a part of my regular rotation.

Glad you love this recipe!

This is a delicious and EASY recipe to make, and it will make you forget all about meat. Who needs meat when you have Cauliflower Tikka Masala?Even my meat-loving husband enjoyed it and asked that it be added to our meal rotation.

Besides being delicious, it is the perfect quarantine meal prep as it uses a lot of stock pantry items. If you’re like me and recently had a pay cut or furlough due to quarantine, this is a great meal prep recipe to help you stretch your dollars.

This is also convenient for those people trying to watch their sodium levels! No salt added in this recipe. I didn’t miss it at all with all the flavor from the spices.

Thanks FFF for the great meal! I can’t wait to eat this for lunch all week!

Made this again last night for diner…YUM

I have made this recipe many times! it is so delicious and satisfying

So glad you love this recipe!

Linley,
John and I just made our first dinner in Key West. It was delicious! I didn’t have chipotle, so added a fresh jalapeno and of course had to throw a bunch of cilantro on the top! yum! This will be going into regular rotation.
Thanks!

I made this for my vegetarian sister while she was visiting and we both loved it! My 11 month old daughter also loves it! Adding this to our regular rotation of weeknight meals. 🙂

Quick question, do the beans go in at the end as well? Didn’t see it in the video. Thanks!