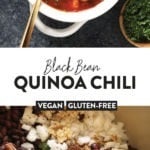 Is there anything better than letting a big pot of quinoa chili slow cook on the stovetop on a chilly weekend?! Make this delicious one pot vegan black bean quinoa chili recipe today.

Chili lovers, we’ve got some great recipes for you! From this black bean quinoa chili to this white bean chicken chili and this super simple green chili, we’ve got a chili recipe for every palate. 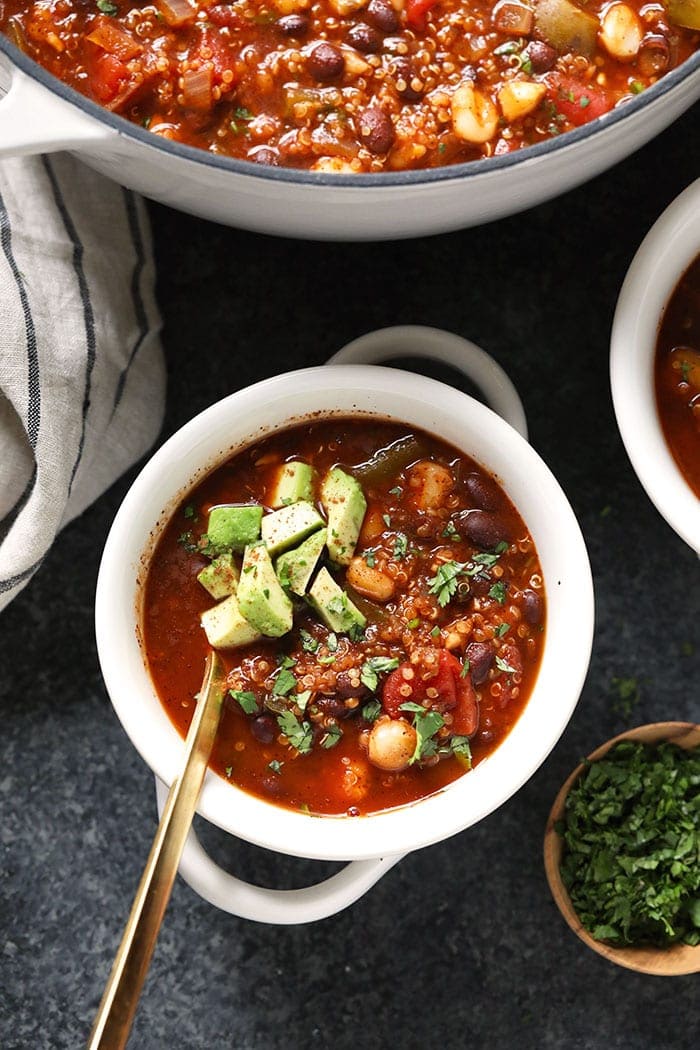 GUYS. This very quinoa chili is one of the first viral recipes we ever had here at Fit Foodie Finds! It went absolutely bonkers on Pinterest a few years ago. So, we decided to retest and rephotograph this recipe to bring it up to date, and we’re happy to share the recipe still rules!

So without further adieu, feast your eyes on the most delicious and perfectly spiced vegan quinoa chili! Yes, it’s called black been quinoa chili, however, there is SO much more to this recipe than those two things!

This chili packs 3 different vegetables: onion, green peppers, and hominy, and the spice combination is fantastic! Let’s get into it: 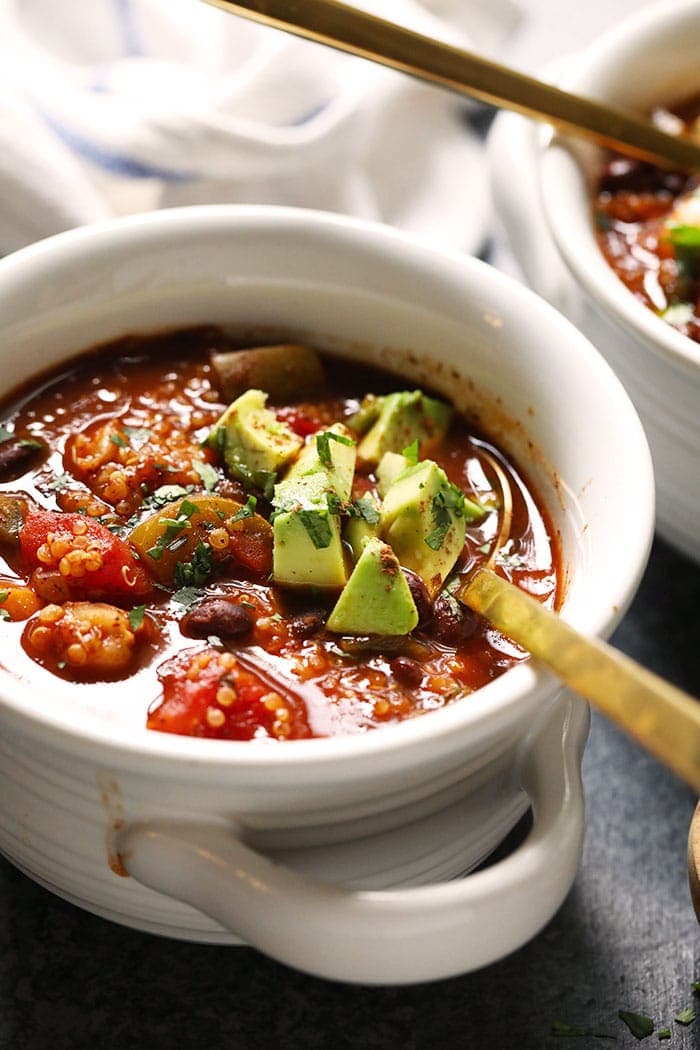 Three cheers for chili recipes that can truly be made in ONE POT. Dump all these black bean quinoa chili ingredients in your stock pot or dutch oven, turn to medium / high, and let it all cook to perfection for 30 minutes. Seriously, that’s it.

In that time, all the vegetables will perfectly cook, the quinoa will have time to cook, and the flavor from the spices will really come out. You’ll be enjoying your chili in no time.

This spice combination gives this vegan chili the flavor depth you’d traditionally get from a meat-based chili, but without any meat or any gluten. Double win. We use:

Ever added a little bit of cinnamon to your chili? If not, it is THE BEST. Cinnamon adds such a great depth to this vegan chili recipe. It gives you a little unexpected sweetness, too! But not TOO much 😀 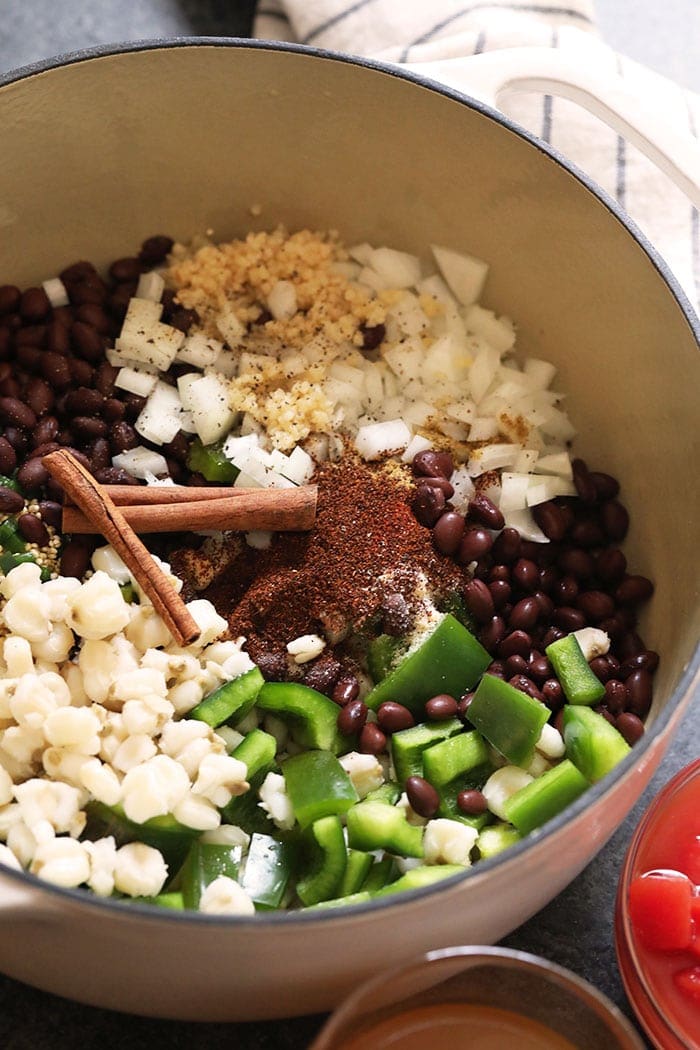 I personally love this quinoa chili recipe because it’s plant-based, veggie-filled, and packs in the protein. If you need to whip up a meal for someone sensitive to gluten, wheat, or dairy — this is your recipe! It’s also:

This chili is oh so flavorful on its own, but if you’re looking to jazz it up with some toppings, we recommend any (or a combination!) of the following: 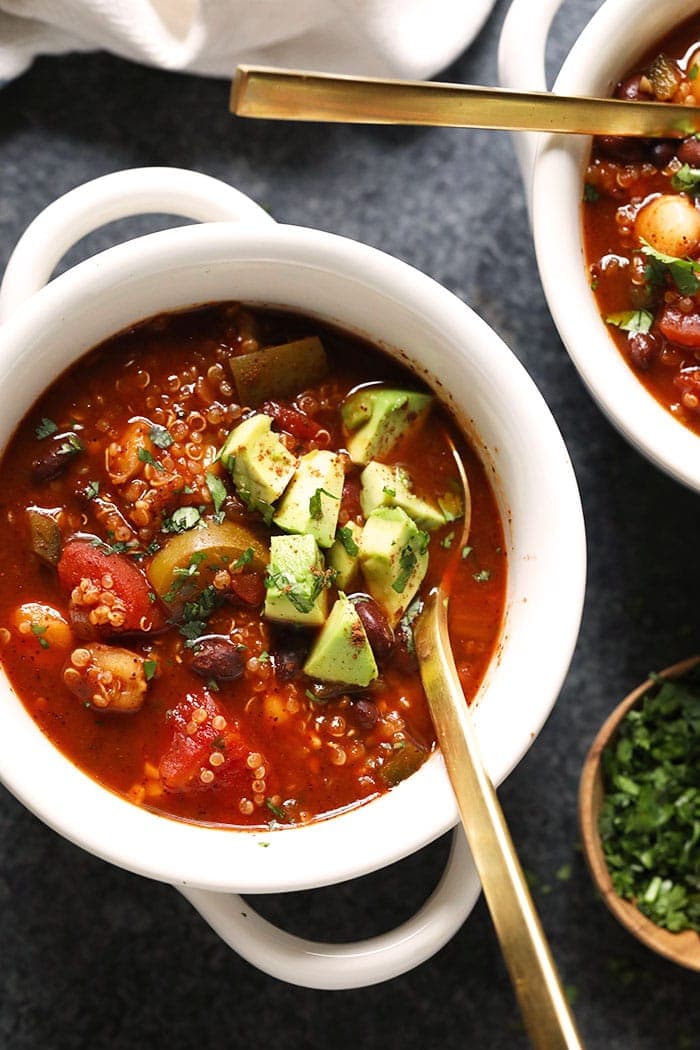 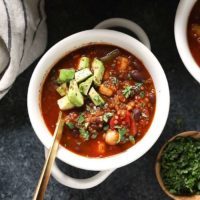 I love this chili, and highly recommend!

I have been using this recipe for years and I love it! I have also served this to several guests as well with great approval. I usually sautee the onions, peppers, add carrots and toast the quinoa in olive oil before adding the broth. I serve this with corn bread, delicious!

I LOVE the toasted quinoa idea. I’ll be trying this the next time I make it!

The best chili recipe, love it every time I make it! I cook the onion and green peppers in olive oil to soften them before adding the rest of the ingredients. I usually sub roasted sweet corn for the hominy, skip the cinnamon and add another 15oz can of tomatoes to make it more chunky. We add avocado, plain greek yogurt, cilantro and cheese to top it off. Mine always soaks up all the broth and turns into more of a hot dish, which is perfect for my young kiddos, I usually keep broth on hand to add to mine and my husbands bowls so its more soup like. Love that I can toss everything in the pot and leave it alone for a while, this is a favorite recipe when having people over because I’m not constantly in the kitchen.

So glad you love this chili! Thank you for the thoughtful review!

Simple and delicious! What a fabulous recipe! Can’t wait to make it again! The cinnamon sticks and hominy make this a very unique recipe! Made it exactly as written!

Wonderful recipe! I added a few red pepper flakes but otherwise followed recipe exact. I will make this often.

Can this recipe be frozen?

Yes it can! We suggest freezing after cooking!

I made this for church potluck. We are mostly vegans or vegetarians. Everyone loved it!! This recipe is easy to make and freezes well. I made it in a larger batch with half mild and the other half with more heat.

What a great potluck recipe! So glad you enjoyed it!

Delicious! Cinnamon is sooo amazing in this chili!!

Your Instant Pot Vegan Chili was the absolutely best vegan or vegetarian chili that I have ever found for the Instant Pot, and trust me, I try a different one at least twice a week. And it is an easy recipe to make. And it makes enough for seconds and thirds. Yum! Now, this Black Bean Chili also looks amazing. Could I dump everything into the instant pot at one time and cook at high pressure for length of time recommended for quinoa? Do you think that would work, or is there any instructions you could give me to convert this for instant pot cooking? Thank you so much for your healthy and super delicious recipes!

This makes me so happy!!!! That is exactly what I would do. IP recipes are tough and they usually take 3 or 4 times to figure out timing just based on what’s in the recipe, but I would maybe try 5 minutes on high + a quick release. If you do it, please let us know if it worked!

Just a note from the spelling police. It’s stock pot, not stalk pot.

I noticed you wrote stalk pot instead of stock pot. Just thought you’d want to know ?

Black beans, quinoa, avocado, chili sauce, and a touch of some hearty spices are the ultimate winner for any warming fall or winter supper! I absolutely love that this recipe is packed with healthy ingredients. No need for anything super salty or refined!

So amazing and easy to prepare. Thanks for sharing!

I love avocado and it is delicious.

It is an easy to prepare recipe. Can I use white beans instead?

This is straight up amazing – no other words for it. I think I underestimated how much a cinnamon stick would do, but my goodness the smoky flavor it brought made this unlike any other chili recipe I’ve made. A+ recipe!

WAHOO!!!! The cinnamon stick is absolutely AMAZING in this recipe 🙂 Glad you loved it.

Holy Cow! I made this chili tonight and it was the best I’ve had or made in years! The only thing I forgot was the cinnamon stick – what exactly does it do for the chili? What kind of flavor does it give or combine with? Looking forward to trying a bunch of these recipes.

So glad you loved this! The cinnamon gives the chili an amazing flavor and is a great contrast with the smokiness of the other spices. You’ll love it if you try it next time!

I’ve made this recipe a couple of times and really enjoy it. I like to top goat cheese and avocado. Also, if you pour it over nachos and top with onions + cheese it is even more amazing.

Thanks for the recipe, Lee!

Goat cheese has the key to my heart 😀

Can you use the crockpot instead? I hope so because I’m trying it right now! 🙂

Sodium is very high per serving. 🙁