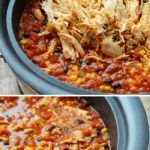 Whip out that slow cooker and pile in all of your favorite ingredients to make this easy and delicious Slow Cooker Quinoa Chicken Enchilada Soup! 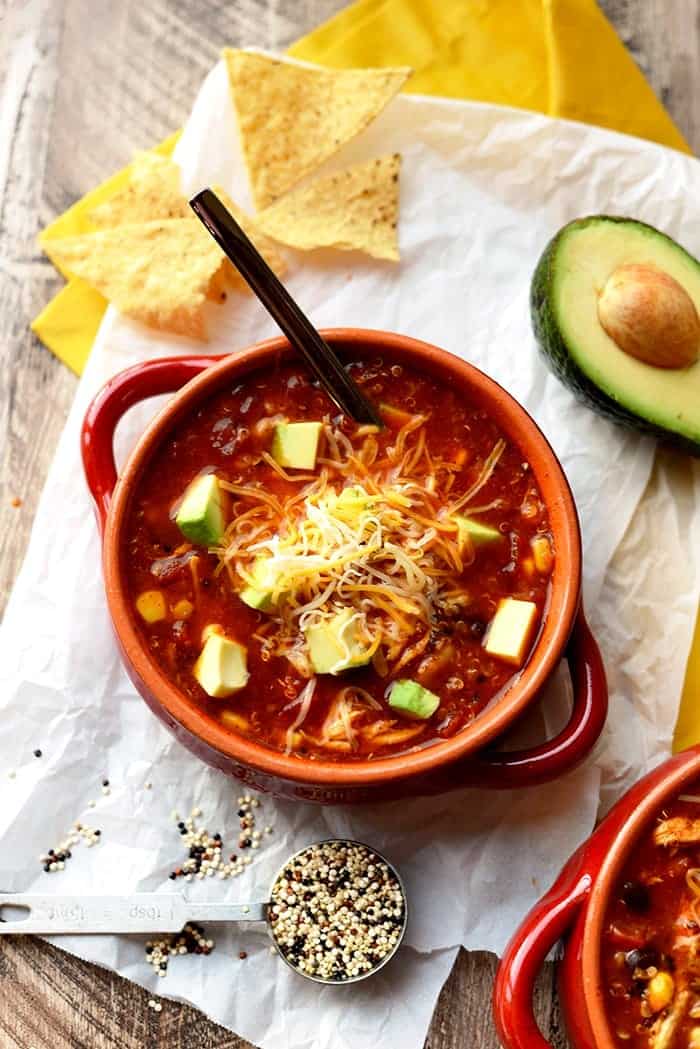 One of the first series I ever did on FFF was One Pot Sundays. Each Sunday during the fall and winter, I would post a meal that could be prepped in a single pot. Ie: Crockpot Maple Cinnamon Steel Cut Oats, Cashew Chicken Quinoa Bake, and Roasted Red Pepper Quinoa Chili. 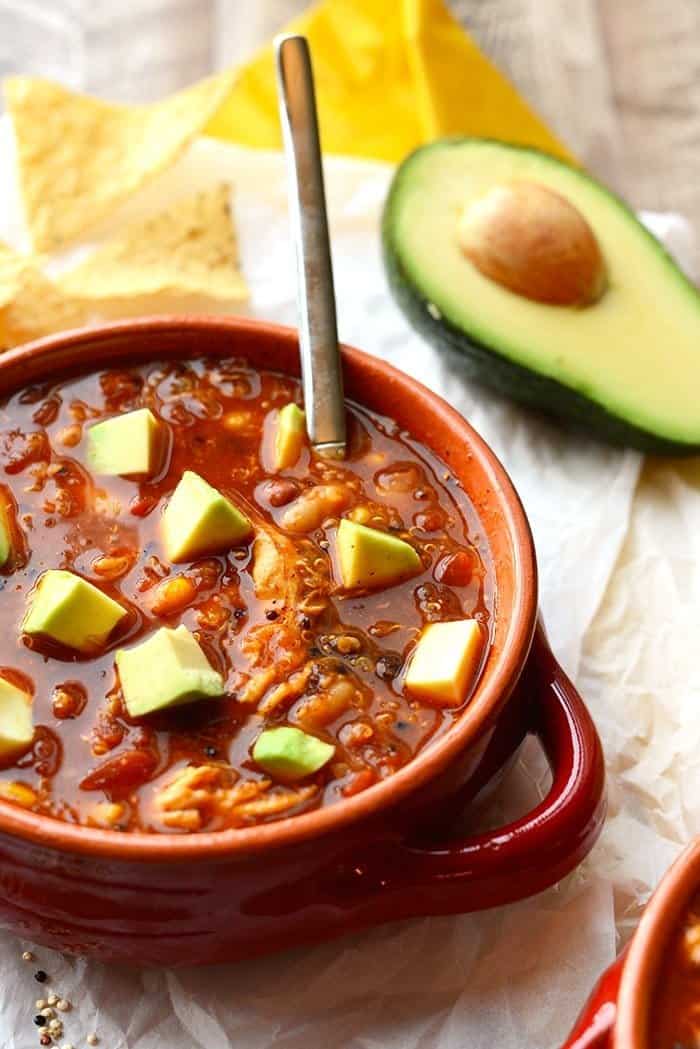 My inspiration for this recipe actually comes from my good friend Abbie! We do dinners together often and the other week she made a very similar rendition to this Chicken Quinoa Enchilada Soup, except for hers was made on the stove top.

I tell you, Abbie is one of the best non-measuring cooks I’ve ever met. 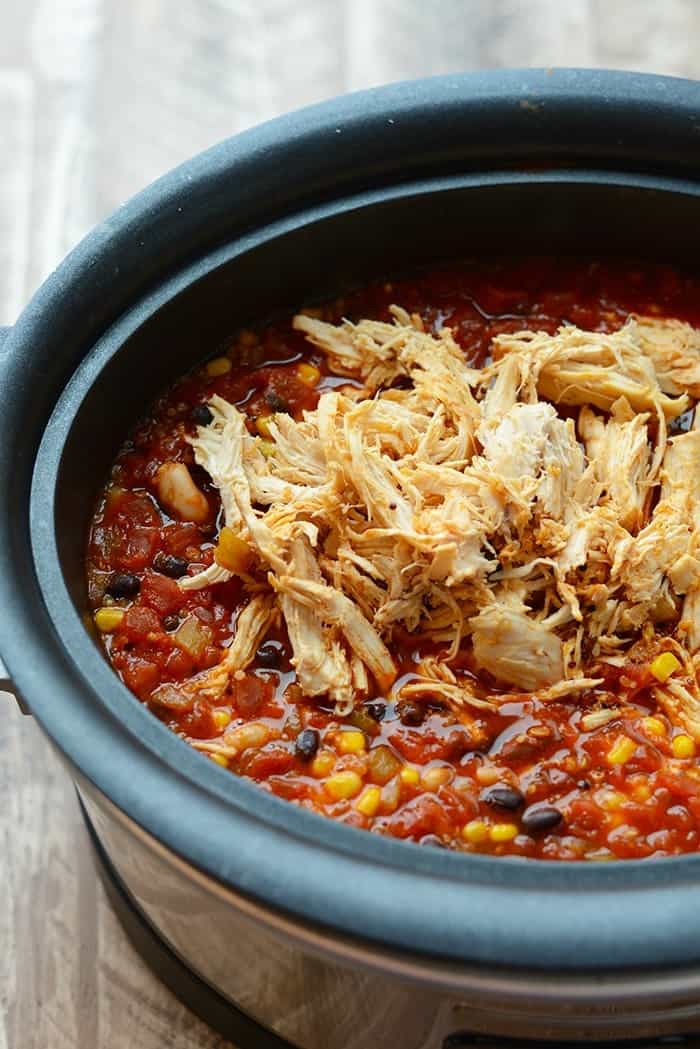 You pretty much throw all of the ingredients, RAW, into a big ol’ slow cooker and let it simmer. Seriously, it’s as easy as that. That’s one of the reasons why I love quinoa so much. It’s such an easy grain to throw into slow cooker soup or chili because it will for sure cook AND give the dish a boost of protein and texture.

Once the chicken is fully cooked (about 3 hours in on high) you remove it, shred it, and put it back in for a few more minutes of simmer time. This recipe is actually difficult to mess up. If you are looking for a healthier enchilada sauce, I recommend Frontera Foods because the ingredient list is pretty short. Or…you can make your own! 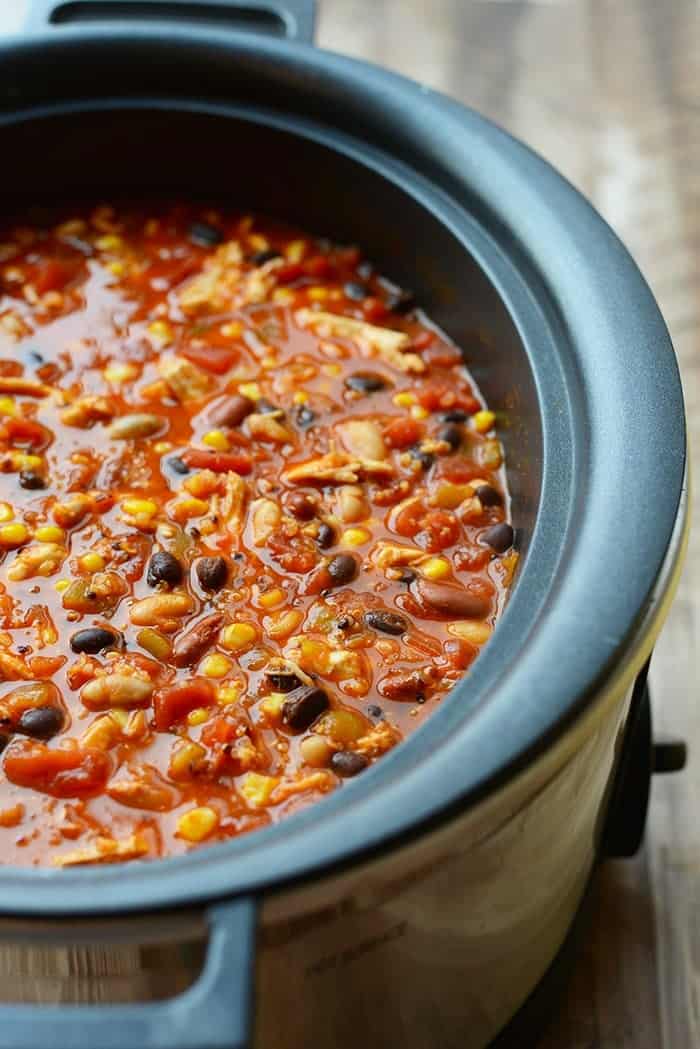 We topped our enchilada soup with fresh sliced avocado and some shredded Colby jack cheese. Don’t forget the tortilla chips. I’ll take any excuse to eat tortilla chips with a meal 😛 Other great toppings include: 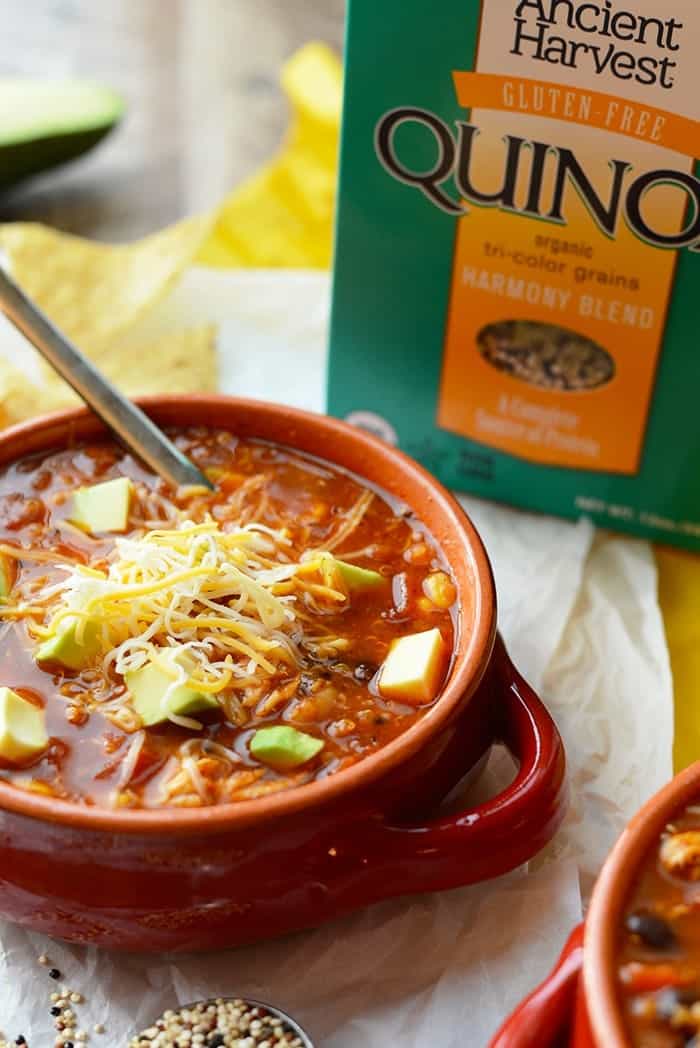 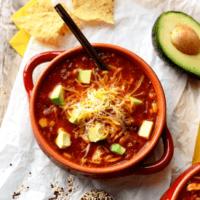 *The longer you let the soup sit, the more water you will need to add to make it "soupy."

I love to eat soup in winter. I will definitely try the slow cooker Enchilada Chicken Soup following the instructions here

Would this be 8 hours on low? Is it necessary to shred the chicken an hour before completion or can that be done at the end. I use these type of dump and go recipes for days im working and need a meal complete when we get home – defeats purpose if I need to do something partially into time of cooking.

Hi Brooke, I would try this for 6 hours on low! And you can definitely shred the chicken at the end 🙂 Hope this helps!

YUM!!! This recipe was too easy and so good!! My husband claims to “not like soup” and he was all about this, asking for seconds!🙃 Thanks for such an easy and healthy recipe with lots of leftovers for the week!

Aw, yay! We’re so glad you and your husband loved this soup 😀

First of all, I love your recipes. FFF and Ambitious Kitchen are my go-to blogs. I was just wondering if I needed to tweak anything to use boneless skinless chicken thighs. I thawed some yesterday and didn’t use them.

Those should work just fine!

Should I leave on high when I put the chicken breasts back in?

Super Amazing!
I am surely gonna try that

I LOVE this soup! Made it for the first time the other night and it was SO easy. My only mistake was using plastic silverware to try to get my chicken out of the crockpot to shred it… oops! haha. Just moved into a new house and didn’t yet have legit silverware. Also, instead of sweet corn I bought the can of corn that has jalapenos and green pepper because I love spicy! Thanks for the great recipe. Keep ’em comin!

RHEA! We are so glad you liked the soup! GOOD CALL on the spicy corn! YOU ARE THE BEST!

This looks delicious! I want to make it for my friend, who just had a baby. If I make the soup for her and then freeze it, are there any special thawing instructions?

This is the perfect new mommy soup! I always suggest using a freezer friendly gallon size bag. Then for thawing, you can just leave it on the counter or place in the fridge overnight!

I found this recipe through a Self article list of slow cooker recipes which I randomly found. This recipe is definitely a keeper in my family – all 3 kids (8, 11, 14) loved this soup!! It made a lot of very filling soup and no one complained when it was served again the next night (& they don’t usually like having leftovers)!

YAY! So glad all the kiddos loved this <3

Delicious! This made more than I expected, which was awesome because I LOVE having leftovers.

YES!!! This is one of my favs. Mark’s parents make this one all the time, too!

Wondering if I can substitute tomato sauce for the diced tomatoes?

I made this soup this week and it is delicious!!! I have been struggling to find a healthy chicken enchilada soup recipe that already had enough flavor and I didn’t need to tweak. I definitely will be keeping this in my regular rotation! Thanks for the awesome recipe! I think next time I might squeeze a little fresh lime and top with some cilantro before serving! There are lots of great topping options and it’s also great on it’s own! 🙂 Thanks again for the recipe!

Fresh lime would be a GREAT addition! So glad you loved this recipe <3

I put mine together this morning. However, once I put in the chicken, beans, enchilada sauce, etc., I had NO room for broth or water. Guess mine won’t be “soup”. LOL!

Oh no! I have no fear that it will still taste delicious!

OMG we just made this a couple of days before the holidays in our cozy little vacation condo and it was soooo delicious! In fact, I stopped eating chicken a year ago, but my mom was cooking this up, unexpected that I would be around for dinner, and I couldn’t resist. I indulged in every bite of that chicken. It was incredible!! 😀

So good that I want to make it again at home. But I don’t own my own crockpot. 🙁 Can I make this on the stovetop? If so, do you know the instructions? Boil then simmer perhaps?

OH EM GEE. This comment totally made my day! I’m glad this Chicken Quinoa Enchilada Soup made you cave back into carnivore land 🙂 I haven’t tried this on the stove top, but I would do exactly what you suggestion. Bring everything to a boil and then let that bad boy simmer until the chicken is cooked all the way through and you are able to shred it!

Awesome!!! I’ll try it and definitely let you know how it goes!! We made the first crock-pot batch last for 4 meals….adding ingredients to it to keep it going. Just finished it today 🙁

SO GOOD right?! Meal prep at its finest 😀

This soup looks divine!! I especially love the one before last photo where you can see the corn, beans, quinoa in the pot, yum! Lately I’ve been eating veggie tortilla soup once a week, but never made it at home (ordered from the Mexican restaurant around the corner). Will have to try this!

Lol, I’m just like Abbie, I’m a very intuitive cook, I don’t measure things just taste and pour as I feel -> one of my gratest challenges for the blog to take notes and be more conscious of how much I use of ingredients, etc. 😉

Wahhh. We don’t have any good Mexican restaurants near me. HMPH. Honestly, when I’m cooking for myself or for friends and family (pretty much anything other than the blog), I don’t EVER measure. 🙂

Mmmm deLISH! I’ve never made quinoa in the crockpot. *FOREHEAD SLAP ummm duh. That would make life so easy! Chicken tortilla soup is one of my favs of all time. This easy recipe looks da bomb dot com.