5 secrets to healthy smoothies: Download
Home Wellness Workouts
6 hours later and I still have a case of the Runner’s High. I think I got myself hooked on a new sport. I can’t begin to tell you how much fun I had. The adrenaline of the swim, the challenge of the bike, and the ass-kicking run. 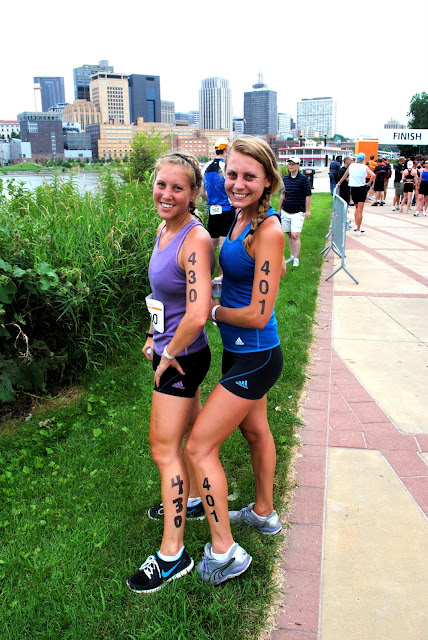 I woke up this morning at 5:15 and was eating my overnight oats by 5:20. Honestly, I wasn’t hungry and had to force myself to eat because I know I would regret it in a few hours if I didn’t. My sister and I got to the race site at 6:30 and set up our transition area by 6:45 and then the waiting began. The Sprint Triathlon was suppose to start around roughly 7:35AM but we didn’t end up in the water until around 8AM. We had to wait for the last Olympic Triathlete, who started their race at 7:15 a few hundred yards up river, to pass the Sprint starting point in order for us to get the go-ahead. Turns out the Olympic race had a late start, so we didn’t end up jumping in the water until around 8AM.
The Swim
The course description of the 500 yard swim down the Mississippi River described it as “fast and fun.” That it was. The current of the river definitely acted in our favor and gave us a quite a push. The entire time I was swimming I just thought to myself: “there’s no stopping me.” Literally- there was no stopping. Even if you stopped swimming, the current would drag you down stream. Hence my extremely fast swim time of 5 minutes and 29 seconds. BAMF.
All that worrying for nothing! In the end, the swim was really no big deal. They sent us off in 3 second intervals to decrease the anxiety and that really helped me stay calm. I did a mixture of breast stroke and front crawl and I am proud to say I didn’t get kicked in the face or swallow any water! #winning
The only part of the swim that was extremely difficult was right at the end. I didn’t take the turn towards the bank soon enough and I got caught in the current, which dragged me down stream past the shoot. I ended up swimming against the current in order to swim back towards the steps. It’s a lot harder than it seems to swim against the current. Check at the picture below to see how many other people over shot the end of the swim! 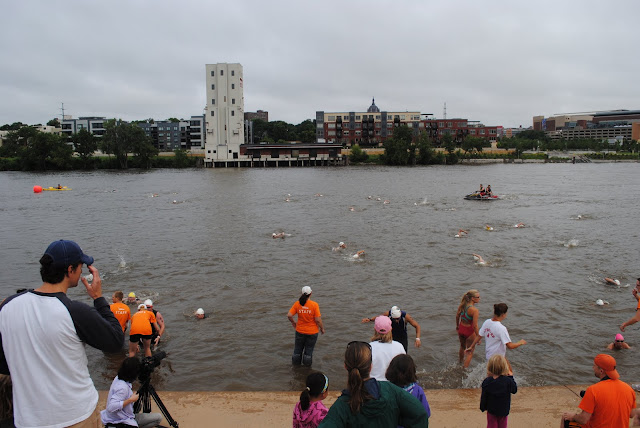 The Bike
The bike was definitely the most interesting part of the race. A LOT hillier than expected. Thankfully, I decided at the last minute to rent a road bike and this really made a difference in speed. I think that having a good bike is really important when it comes to racing.

For most of my training, I used a mountain bike and trained on flat terrain. Today was completely different. There were mile long stretches of up hill and thank you lord for the road bike.

Overall, I felt extremely comfortable because I was not in a pack of people. As part of the race, a single file rule was allocated for safety, which also lessened my anxiety. I ended up pacing myself with a 30 something year old guy who looked like he knew what he was doing. I think I ended up finishing before him in the end because of my 5k time.

My bike time was 53:27 minutes- averaging just under 4 minute miles. I really had no idea how fast I was going to ride because I have never trained on a road bike before, but I for sure thought it would be over 4 minute miles. I am interested in seeing what my time would be if it would have been completely flat.

One thing about the bike that I didn’t like was that there were no mile markers or clocks. AKA the entire ride I had no idea how far or long I had been going. *hmph*

The Run
The transition from the bike to the run was definitely the most difficult part of the race for me. After a minor calf cramp up the last hill on the bike, my legs felt like jello when I first jumped off. It took me a good 3-4 minutes to get into my run.

The 5k was filled with 2 giant hills over a steep bridge- there and back. Again, I was not expecting the terrain to be so hilly! Originally I thought that the bike was going to be my best leg, but for some reason I kicked ace during the run. *I think I know why*

During the bike as I was huffing and puffing up one of the hills, a 10 year old scronny little guy, cruised right on past me. *er you surious* Anyway- long story short, I caught that sucker on my run! I used him as my motivation and kept telling myself to “catch the kid.” When I saw him yards away, I kicked it into gear and passed him up with around 1/2 mile to go.

He must have popped a few skittles in his mouth, because he came out of nowhere right at the very end. The little energizer bunny beat me by like 1/2 a second. Still a win in my mind.

My 5k time was 25:25 minutes averaging just under 8:15 minute miles. I was shooting for around 9 minute miles, so again I underestimated my ability!

Overall, I had a great race. If I could choose two words to describe how I felt afterwords it would be challenged and accomplished. My final time was 1:27:44. 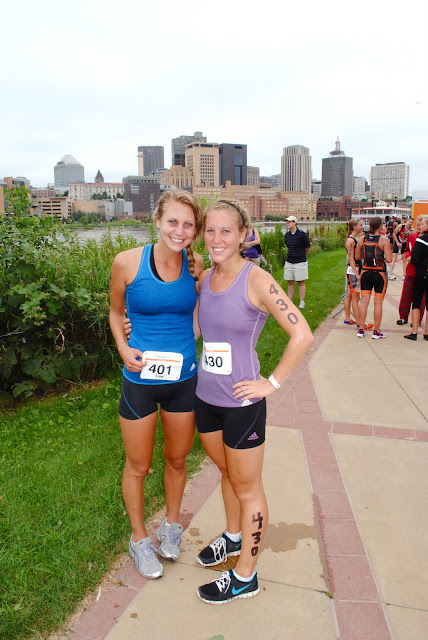 Me and the Sister 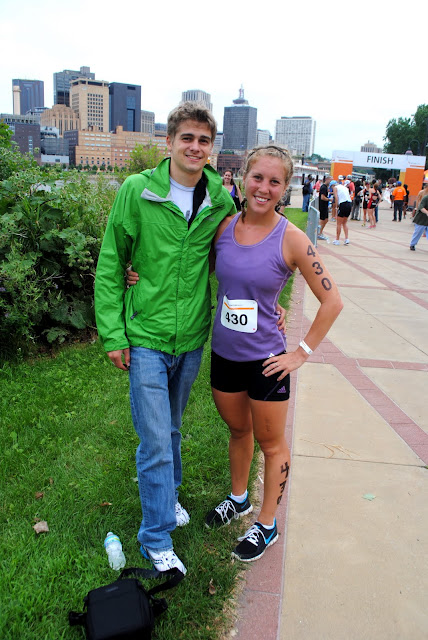 Before the race we connected with a few other female athletes. It’s so great to see other youngns’ out there with motivation and determination! We all finished within a few minutes of each other. 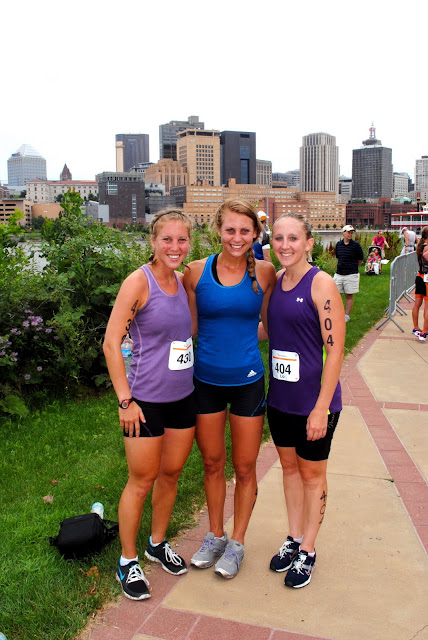 Sister, me and Liz

Anyways, you guys aren’t going to believe this [because quite frankly I’m still in shock], but I placed 3rd in my age group, 20-24 year olds! Cool right?? I’m not exactly sure how many females were in my age group to begin with, but who cares right?? I got a really cool hat that says: I placed third in my age group. HAHA! 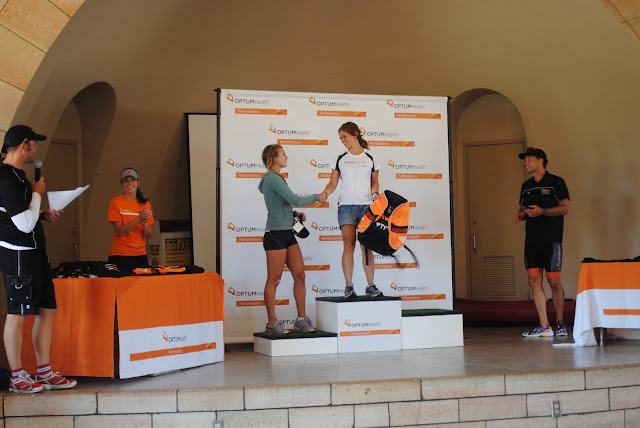 I’m sure you are wondering what I ate after the race. Surprisingly I wasn’t too hungry. I had a few orange slices and a banana around 20 minutes after the race. When lunchtime rolled around, hunger wasn’t an issue. Some friends were meeting us for lunch so we made our way to Whole Foods for some hot bar action. In my opinion, there is really no better way to celebrate than a giant, nutrient packed WF salad. I got pretty much a taste of everything down the line. I do have to say, the curried cauliflower was outstanding. 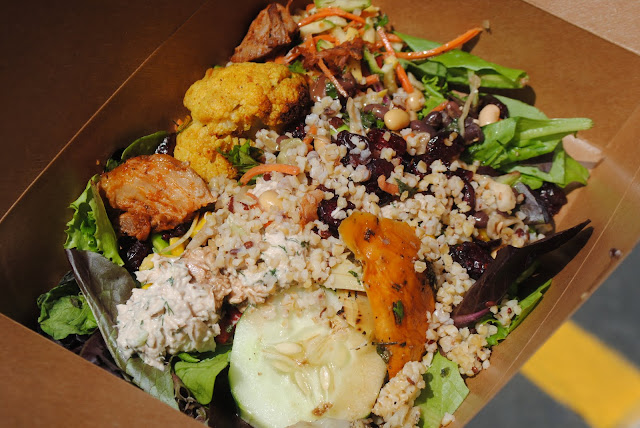 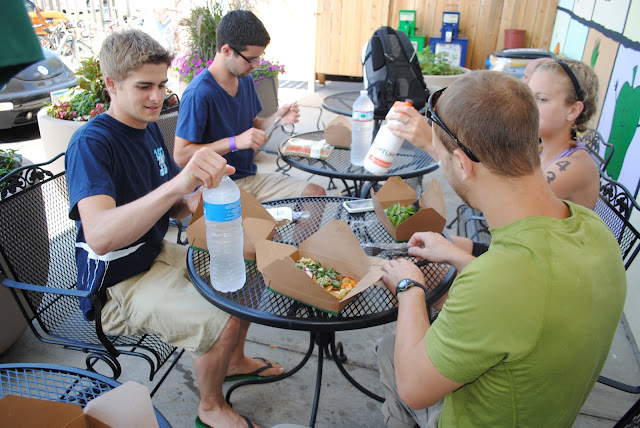 I am so glad I did this. I was [this] close to chickening out right at the end. For me, it wasn’t about my time or winning; it was about completion. I knew I could do it because you can do anything you put your mind to. Never say you can’t because you can.

What is your favorite celebratory place to eat?


Do you have any interesting/motivational race stories? About catching the kid in front of you?