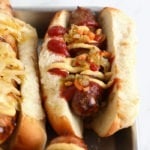 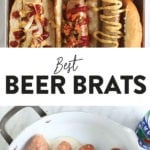 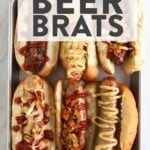 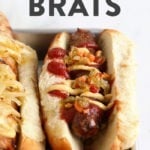 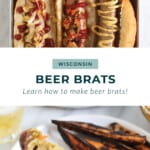 Ever heard of beer brats? Beer boiled brats are by far the most delicious way to cook brats. Start by boiling your brats in beer and then finish them off with a sear on the grill, some ketchup & mustard, and relish too!

In this post, we are teaching you how to cook beer brats. We’re also sharing some tips and tricks to getting perfect beer boiled brats every time.

If you’ve never had a beer brat, you’ve never truly experienced a good ol’ fashioned Wisconsin brat! Growing up in Milwaukee, cooking brats in beer is just what we did. Not only does the beer infuse a delicious hoppy flavor, but it’s so easy!

What is a brat?

First things first, what is a brat? A brat AKA “a bratwurst” is a German-style sausage that is typically made with ground pork.

Brats can also come made with other cuts of meat such as veil or chicken. They can even come as a blend of meats and other add-ins such as cheese, jalapeños, etc.

What is a Wisconsin beer brat?

A beer brat is when you boil uncooked brats in a couple of cans of beer to fully cook it on the stovetop. Oftentimes, they are finished off on the grill.

We truly believe beer brats are superior to any other kind of brat because they are so dang delicious.

What kind of brats are best for beer brats?

There are lots of bratwurst brands on the market, but we definitely have a favorite –>Johnsonville! They make so many different variations and they are based in Wisconsin. It just makes sense.

What kind of beer should I use?

When it comes to what kind of beer to use to boil your beer grats in, it’s all about preference. We prefer using a light beer such as:

You can really use any kind of beer your heart desires. Heck, you could probably even make cider brats and boil your brats in cider!

Beer brats actually don’t have any alcohol in them because the alcohol is burned off during the boiling process. Thus, beer brats are non-alcoholic and kid-friendly.

How to Make Beer Brats

Cooking brats in beer is so easy. From start to finish, this recipe should take you around 10 minutes. You’ll be using your stovetop and grill to finish them off.

Start by placing your uncooked brats on the bottom of a large pot. You can boil as many brats as you want. Then, pour on a few cans of beer on top of them. The goal here is to completely submerge your brats so that they boil evenly.

Turn burner to high and bring beer to a rolling boil. Then, lower the heat to low/medium and let your brats simmer for around 10-15 minutes, uncovered. Your time will vary depending on the thickness of your brat.

Heat grill to around 450ºF. Grill brats for around 5-8 minutes, turning every few minutes.

The goal here is to give your brats some char so that’s why the temperature is set a little higher. Since you’ve already fully cooked the brats from boiling them in beer, you want to make sure you don’t overcook them on the grill.

Other cook methods: if you don’t have access to a grill, we suggest searing your brats on the stovetop. This will give them some extra texture!

Grill brats until they’ve reached an internal temperature of 145ºF, which is the FDA’s recommendation for pork.

Now that the brats are cooked and ready to go, it’s time to doctor them up! We suggest slightly toasting your buns on the grill. Otherwise, you can go bunless!

How to Cook Beer Brats FAQ

How long to boil brats in beer? Boil uncooked brats for anywhere from 10-15 minutes. The thicker your brat, the longer you’ll want to boil. You know they are fully cooked when the internal temperature reaches 145ºF. They should be firm to touch and no longer pink on the inside.

How long do I cook beer brats on grill? Since your beer brats are technically already cooked from boiling them, the grill part is really for extra flavor. We suggest grilling for around 5-10 minutes to get those glorious grill marks.

Do my brats have to be uncooked? While they don’t technically have to be uncooked, it’s really the best way to make this beer brats recipe! If you are using cooked brats, you can let your brats soak in beer overnight instead of boiling them. You won’t get the full flavor effect using this method, but it’s a close second.

Are beer brats healthy? You might be surprised, but yes! Depending on the kind of brat you use, beer brats are a great, protein-filled dinner option. For the healthiest beer brat, we suggest using an uncooked chicken brat/sausage.

Are beer brats alcoholic? No! Beer brats are not alcoholic. When you bring the beer to a boil, you are actually boiling the alcohol out of the beer. If you’re concerned, we suggest using Heineken 0.0 for this recipe, which is what we use anyways!

What beer goes with brats? Light beers go really great with beer brats and that is what we suggest.

Baked Potato Salad: This baked potato salad is loaded with cheddar cheese, bacon, chives, hard-boiled egg, and a dill pickle sauce! It’s the perfect potato salad to serve at your next BBQ or party.

How to Grill Your Favorite Meat

We add butter and onions to the beer solution, the onions can then be used as a topping

You have some very fun ideas however, I would challenge you to do a bit more research on the alcohol content of a beer boiled brat. It can not be said that all the alcohol is cooked out of this meat, even after you grill it. I agree that you will be grilling after boiling however, there will still be a percent of alcohol that stays in the meat.

Great article minus 2 issues (personal preferences). The beer does make a difference, Yuengling is the best or any other German beer, Guinness works well too. And never put ketchup on a brat, that’s just wrong. Haha.

Send fitfoodiefinds to my internet everyday thank you. So I can print out