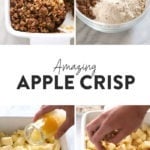 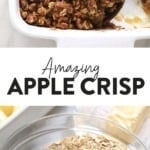 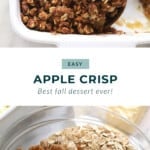 This delicious apple crisp recipe is made with a simple apple filling and a delicious crumble topping. Make this healthier, fall-inspired dessert today!

We are loving apple recipes right now! If you have leftover apples try making our easy cinnamon apple bread or these delicious apple cinnamon muffins.

Can you think of anything cozier and fall-like than Apple Crisp? The answer is, unequivocally, no! We know there are Apple Crisp recipes aplenty, but this one might take the cake, errr, crisp!

This easy apple crisp recipe is a classic crisp recipe that is foolproof and delicious! We understand that not everyone knows how to make the perfect apple crisp, so in this post, we’ll give you the nitty-gritty.

Our signature apple crisp recipe is made with a simple apple filling and a golden brown, perfectly sweetened oatmeal crisp topping.

How to Make Apple Crisp

First things, first. Choose your apples! Most apples will work for apple crisp. Our favorite variety to use is Gala because it’s sweet and crisp. Here are a few other favorites to try:

After choosing what apples to use, peel them and slice them into small chunks. Place them in a greased 8×8-inch baking dish and sprinkle them with flour and orange juice.

Mix until all of the apples are coated and set aside for later.

Yes, you read that correctly. We love adding orange juice to our crisp recipes because a little bit of citrus really does make a difference. Just trust us!

The second step to making the perfect apple crisp is combining the ingredients you have to make a buttery crumble for your apple crisp topping.

Here’s what you need:

Here’s how to make it:

If your butter isn’t quite room temperature, try cutting it into thin squares and then place it in the bowl. From there it should be easier to work with.

Finally, sprinkle the crumble topping over the apples so that it is easily spread out. Then, place apple crisp in the oven and bake for 40 minutes at 375ºF.

Bake until the crumble topping begins to turn golden brown and the apples start to bubble.

Apple crisp is such a nostalgic dessert recipe for so many people. I didn’t realize how easy it was to make apple crisp until later into my adult life! Apple crisp is an approachable dessert that anyone can make!

My favorite thing to do is whip up an apple crisp and get it in the oven right before guests come over. Your house will smell amazing and dessert is ready in under an hour. Two birds, one stone.

What is the difference between apple crisp and apple pie? Apple crisp and pie have similar fillings, but a crisp has a crumble topping and a pie has a pie crust topping.

What can I do with lots of apples? There are so many delicious apple recipes out there! We have healthy apple recipes that will keep you in the kitchen all apple season long. Here are some of our favorite apple recipes: 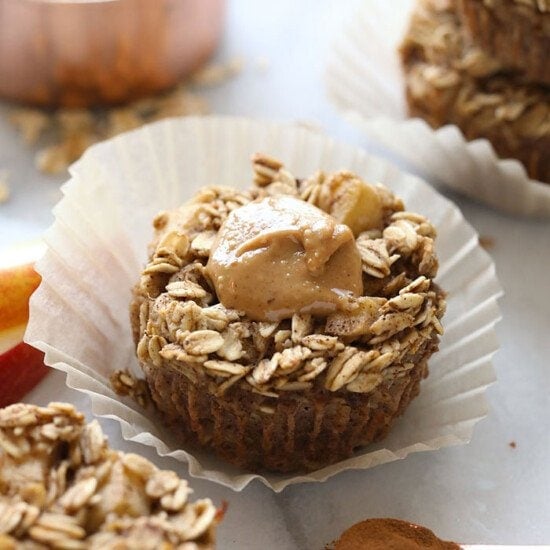 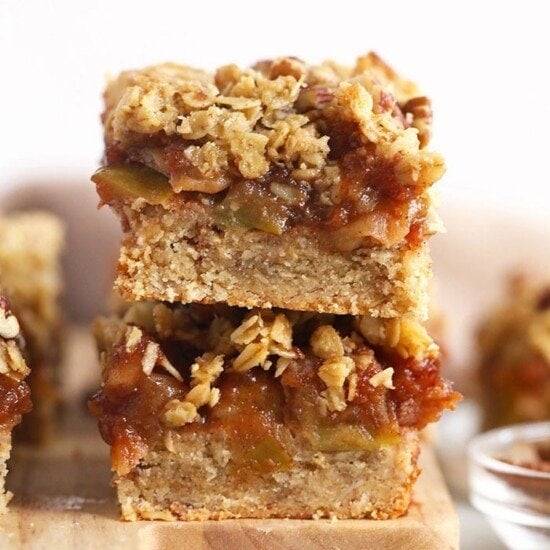 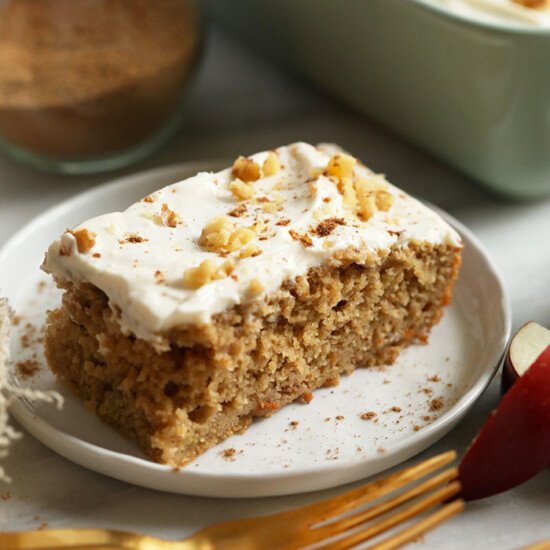 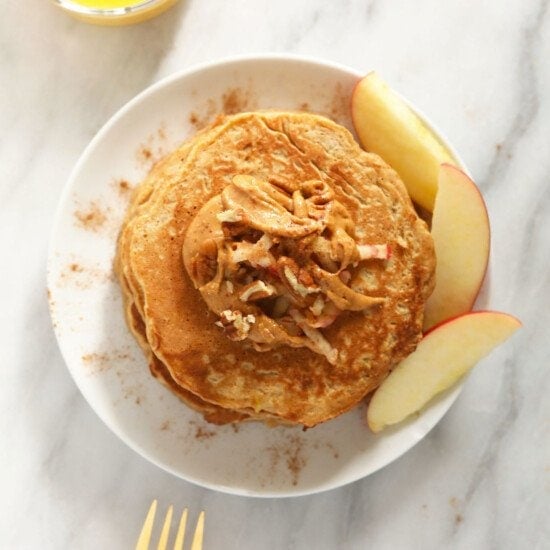 Should apple crisp be refrigerated? We recommend letting your apple crisp cool completely before covering it and storing it in the refrigerator for up to 3-5 days.

Are you a homemade apple crisp pro and want to mix things up a bit? Here are a few variation ideas!

Add a berry: Add 1/2 cup blueberries, strawberries, or blackberries to the apple filling to give your crisp a twist.

Spice up the crisp topping: In addition to ground cinnamon, try adding a few other warm spices such as nutmeg, cardamom, or allspice.

Make it vegan: to make this recipe vegan, swap the butter for vegan butter or coconut oil.

Let your dessert cool completely. Then, transfer it into an airtight container and cover. Refrigerate for 3-5 days.

I’m going to make this recipe for dinner. So excited!

I made this recipe because I had a ton of apples left over from apple picking….best decision ever! Delicious!

This is delicious and easy! I made it two days in a row! Once to share and the other to keep for myself 🤤

Mmm. delicious fall pudding, lovely and warming and even better with a scoop of ice cream and some custard!
Only thing is that it isn’t exactly a traditional crumble topping and doesn’t clump together much, just forms a lovely crunchy crust. I used coconut oil and coconut sugar, so that might be why it didn’t bind quite as well.