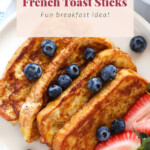 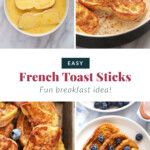 These French toast sticks are the perfect and kid-friendly breakfast. Looking for more healthy breakfast options for the family? Check out this Peanut Butter Banana Oatmeal Bake or Oven Baked Bacon.

What are French Toast Sticks?

French Toast Sticks are an American twist on classic French toast where sliced bread is soaked in an egg and milk mixture and fried on the stove top.

If you ate school “hot lunches” you probably remember French Toast Sticks as a popular choice among school children.

The cinnamon sugar topping really is the cherry on top! It’s so simple and you only need two ingredients:

Tip! Have fun with your cinnamon sugar topping and use a fun spice mix such as chai spice or pumpkin pie spice.

How to Make French Toast Sticks

Wondering how do you make French Toast Sticks from scratch? Prepare an egg wash, slice your bread into “sticks”, dip them in the egg, and fry them in butter. Check out a more detailed step by step below.

In a medium bowl, whisk together eggs, milk, and maple syrup. We like using a whisk for this, but you can also use a fork.

Slice 8 pieces of thick bread either in half or in thirds, depending on how wide your bread is. We only needed to cut ours in half, length-wise.

Dip each French toast stick in the egg was, fully coating both sides. We like to let them sit for at least a minute to let them soak up as much liquid as possible.

Heat butter in a large nonstick saucepan over medium/low heat. Cook French toast sticks on both sides until golden brown and fully cooked in the middle.

Combine brown sugar and cinnamon and then sprinkle on a generous amount to both sides of your French toast sticks and cook them for 20 seconds on each side until they crisp up.

Repeat this process until all French toast sticks are fully cooked.

Use whole grain bread: instead of using a white bread such as brioche, feel free to use any kind of whole grain bread. One tip in this realm is that the thicker the bread the better, but thin will work too.

Use less butter: instead of butter, you can use cooking spray. This will help reduce both fat and calories.

Every piece of French Toast deserves to have a mound of toppings. The most important being maple syrup! Here are some other ideas:

Complete your breakfast with some of our other popular breakfast recipes to make your meal a well-rounded one!

Let your French toast sticks cool completely. Then, transfer them into an airtight container and seal. Store in the fridge for up to 3-5 days.

Can You Freeze French Toast Sticks?

French toast sticks are a great breakfast to freeze for later.

Looks lovely! My mom actually taught me a savoury version of this recipe, which just replaces cinnamon and sugar with garlic salt and parsley. My kids love it topped with a little ketchup

No words its simply amazing thank you so much for sharing,

This is not Egg Free?

Unless I can use an egg substituent for this? Possibly “JUST” brand.

Recipe is labeled egg free ??? That is clearly not correct.

My my! These sound so good. I love French Toast when I go out to diners, it’s all I ever get. But I should probably get to making healthier ones at home 🙂

Could these look any more perfect! I’m loving the yellow tint of the yolks. Nothing beats farm fresh eggs! xx

AH! SO good. Love french toast, and your photos are amazing!

Perfect as a finger food for kids. Can go well with breakfast or as a snack. Yummy…thanks for sharing the recipe.

YAY! Glad you loved it! One of my favs 😀

lol totally brought a lunch everyday except pizza day, spaghetti day, nacho day, and pancake day 🙂 Mom would never buy the Eggo french toast sticks so whenever I got to have them at a friends house I felt so cool. Farm eggs are the BEST and we are considering getting chickens. YES.

ps loving this style of photos!

pps what is your snapchat?!?!

HOW DID YOU KNOW?! I’m obsessed with french toast…I literally could eat it every single day. Think that will be tomorrow’s breakfast!

It’s 6pm and my belly is growling for these! I was a brown bag lunch kind of girl, every day 🙂

Gorgeous photos. I totally brought my school to lunch when I was a kid. Yogurt and a bagel EVERY DAMN DAY.
Ps. Organic Farm eggs are amazing and taste so MUCH better. Try the Trader Joe’s kind – they are awesome!

I ALWAYS brought my lunch to school from kindergarten to senior year of high school! Staples included grapes, raw cabbage cut up (yep, I loved it as a kid!….and was totally “that kid”), and 2 of my Mom’s homemade chocolate chip cookies because…everything in moderation 🙂

HAHAHA. Cut up cabbage. That is so random and AMAZING.

These look so incredible, I could eat up a whole batch all by myself.

I love the backlit shot. I can’t seem to master those for some reason.

Ahhhh, right?! Backlit is a beast, but I loooooooove the moodiness it gives your photos once you master it!

I love different HEALTHY breakfast ideas – this one is perfect!

These look delicious! I might have to make them this weekend.

They’re a breakfast pleaser, that’s for sure 😀

Kid-friendly is right, my son is going to LOVE these~ Trying them out this weekend! Thanks for the recipe!!

YAY! You’ll have to let me know what he thinks!

Dude I lived on these babies as a kid! Love that you remade them and made them healthy and the vanilla almond breeze.. heck yes please! Can’t wait to make these with my little guy, he’s gonna love them!

Yummmmmm! Lurve me some frenchy toasties!