These Gluten-Free Apple Cinnamon Oat Pancakes are hearty and delish. They are made with 100% whole grains, no refined sugars, and real apple chunks! 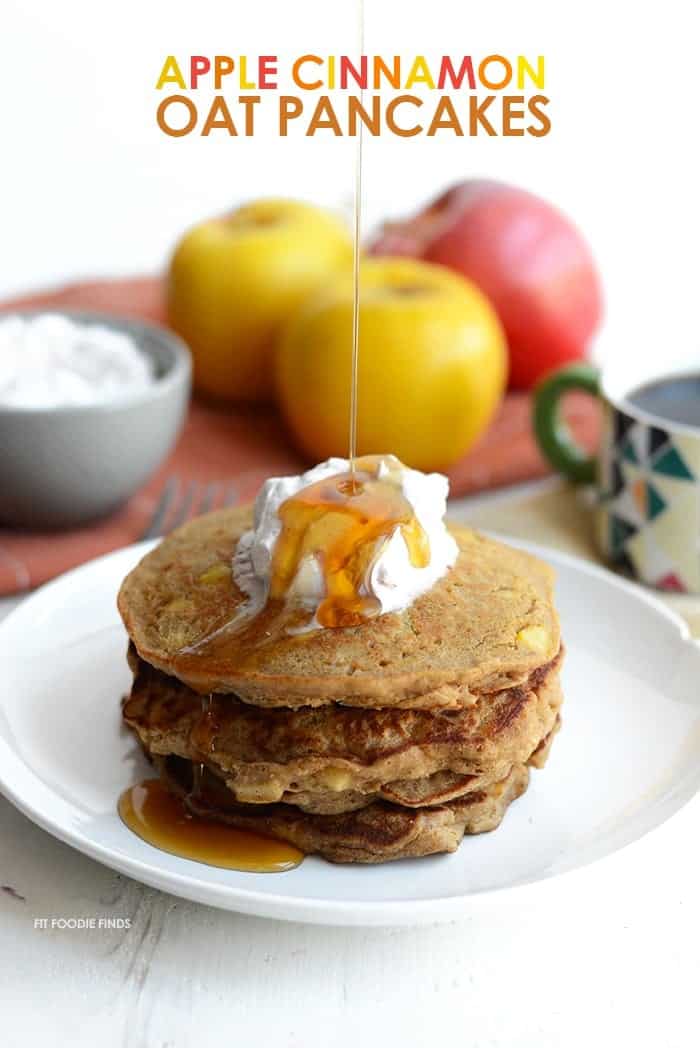 It’s true, I’m a total pancake whore. I make em every week…usually on Sundays and make sure to make a GIANT batch so I can have leftovers. Pancakes are about the only thing Blake will eat “gluten-free” …as long as I don’t use that “fake flour stuff” aka gluten-free all-purpose flour.

One day he will get over it and just eat the damn gluten-free cookies. And like em’ too!

The other day I made spaghetti and totally lied to him telling him I used normal noodles. He takes one bite, looks up at me like a sad puppy as says…”DON’T DO THIS TO ME.”

I proceeded to tell him that they were brown rice noodles, because he’s grown to like those, and said OHHHHH no they’re not. He caught me red handed. I was testing out a new noodle…quinoa noodles. Apparently it tastes like dog food in his opinion. I ate em’ up like it was my job and licked my plate too! 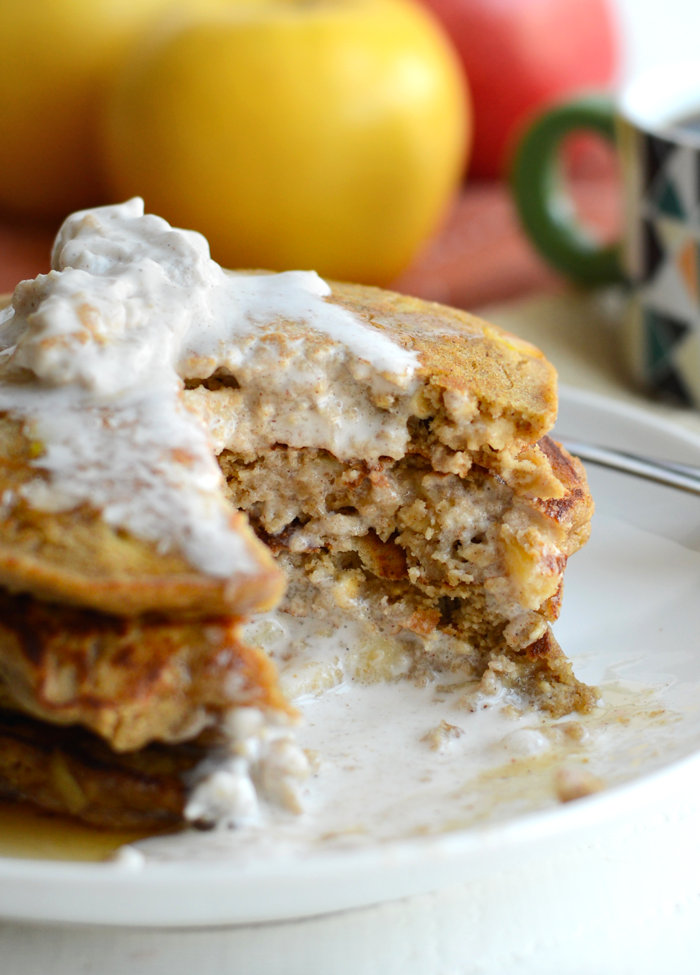 What I’m trying to say is that Blake approves of these pancakes!

And so do I for that matter.

Apple cinnamon is one of those flavors that I just can’t get enough of. I could eat it all day erry day! 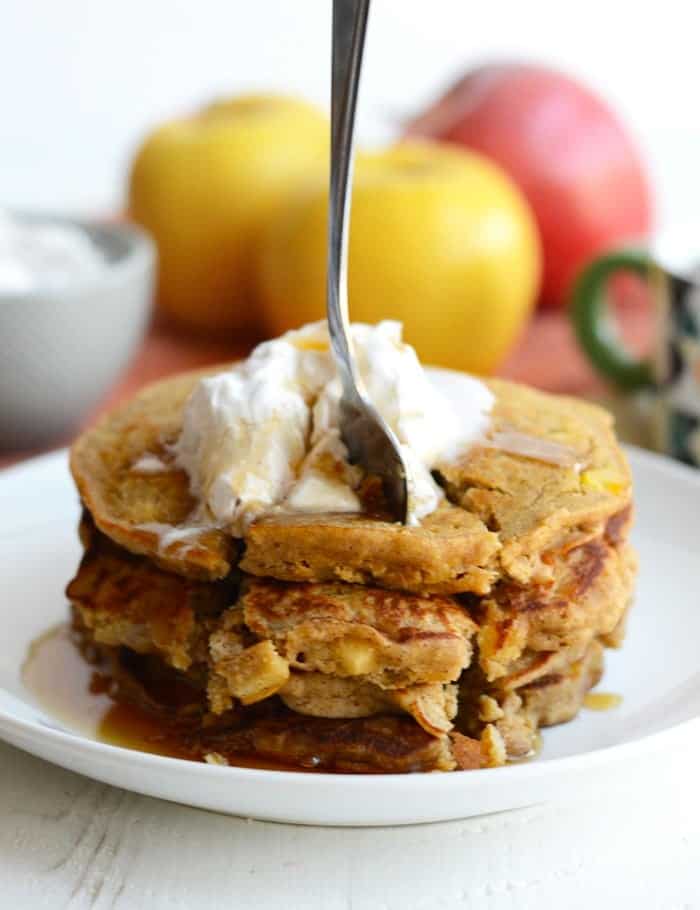 On top of these panny cakes, I made some vegan whipped cream sweetened with maple and a hint of cinnamon. AH MAY ZING. Lately I’ve been using the Trader Joe’s brand coconut cream to make my whipped cream. I find that it holds shape much better than just full-fat coconut milk.

I could take a bath in that stuff.

It would actually, probably, definitely be really good for my skin if I did that 😀 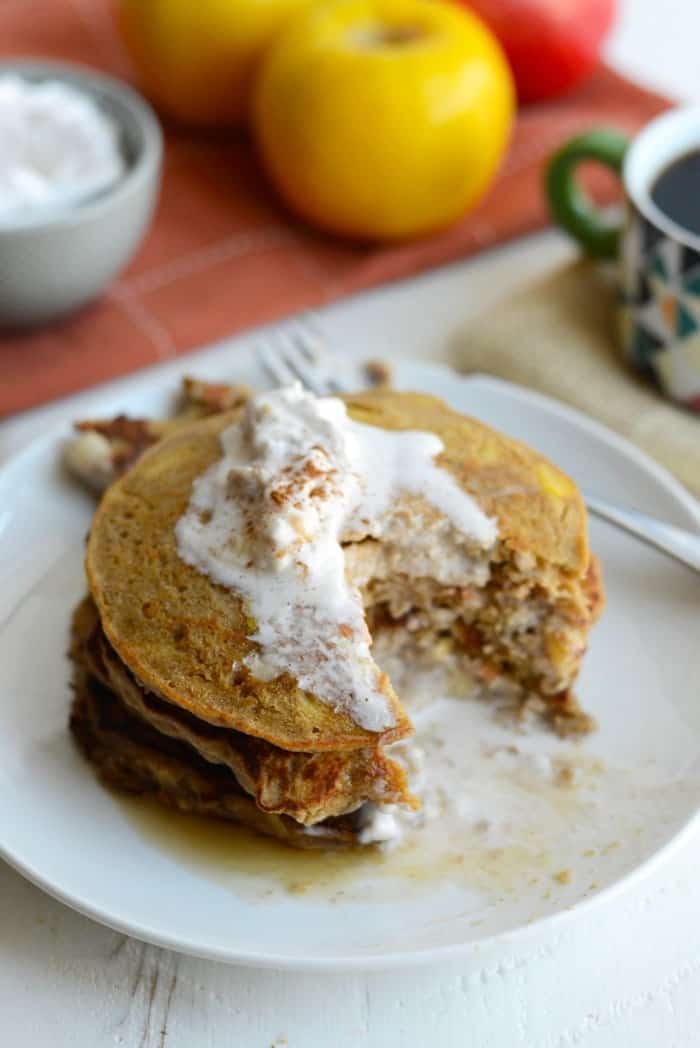 Can a different oil besides coconut oil be used?

You can try canola or butter!

[…] e vanilla next time or some nuts, just felt they were a little bland. But for gl […]

Lee, could you tell me what cup do you use exactly for measurement? 200 or 250 ml? I guess in your country it’s a bit different from Russian measure.:) Can’t wait for the next morning to do these amazing pancakes!!

These are so perfect for my traditional pancake Saturday! Definitely making them tomorrow morning. Thanks for sharing! xoxo

So glad you loved them! Vanilla would be a great touch!

I’ve tried so many GF pancake recipes and always ended up a bit disappointed in some way. I just tried these, and they are perfect! Great texture, held form, didn’t stick or have a gooey middle! And they taste so yummy! Huge bonus is that it does not require expensive almond flour or a mix! I always have these simple ingredients stocked and can make these right in my Blentec beginning with grinding the oats to a flour! I Topped these with homemade strawberry syrup and coconut cream. Delish! My family and I send you a huge thank you!

Yay! This makes me so happy! Glad you loved these pancakes 🙂

These Apple oat pancakes are yummy! Made them in advance Friday for Father’s Day, doubling recipe then freezing portion of them. My picky 9 yo son loved them & wanted more!

Love that you froze the pancakes! Such a great idea. The PB Cookie Dough Oats are BOMB!!!

Delicious! I only used 1 T agave nectar & put rolled oats in the food processor to make the flour. It was perfect. Light & fluffy. Thank you.

Meg @ The Housewife in Training Files

Atleast you are just a pancake whore. That could go bad quickly….
And I tried those quinoa noodles and we liked them! I guess my hubs just accepts that I am not going to serve him regular noodles ever again and he doesn’t want to starve. He picks his battles.

PS…when are you coming to KC?!

I’ve been looking for a healthy pancake recipe that combines oat flour and whole oats..Looks like awesome texture. Can’t wait to try these. Thanks for sharing!

Maybe Blake would come around to GF noodles in mac and cheese form? My boyfriend is also incredibly picky about those things and gobbled up quinoa pasta when I put it in mac…because really…who can resist that? 🙂

Love the recipe! I am a pancake freak and am always made fun of by my friends for making/eating so many pancakes. They don’t know what they’re missing out on. And the coconut whip? Genius!

SERIOUSLY. I love mac and I don’t make it often enough! Cheese makes the world go round.

These look great, and I LOVE the topping! I know it’s hard, sometimes w/ GF dishes, but these sound like they’ve been approved!

They totally have been! Like 90% of what I make for him is Gfree and he doesn’t even know it. It just gets a witty picky some times!

Seems very tasty … more food is back in reach for us gluten-free folk!

yum I freaking love pancakes and apple cinnamon sign me up!!

Ha – Johnny is always my taste tester too. I can count on him for brutal honesty. These look great!

😀 Even though they were gfree, Blake loved them! I had to remind him that I ALWAYS use an oat flour base for our pancakes and he’s never complained before 😀

Seriously, Blake can taste differences in noodles?? And what the heck, he doesn’t like glutenfree cookies, even when they’re made by YOU? They don’t taste any different…….. weirdo (sorry) 😉
Apple cinnamon is an alltime favourite flavour. I would make this whole batch of pancakes and eat it too 😀 No pancakes leftovers in my house!
A coconut milk bath sounds awesome too. Coconut apple cinamon!!

I KNOW!!!!!! More cookies for me so I’m not complaining 😀 And a coconut apple cinnamon bath would be legit. We should start a new business.